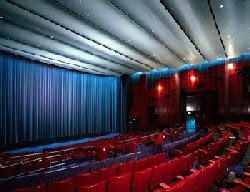 Beginning tomorrow, Cineplex will be offering theatre rentals for gamers interested in playing Xbox 360 titles on the big screen with surround sound. For $179 plus taxes you get access to a two-hour private theatre gaming session for up to 12 people. Cineplex will be rolling this rental program out at 29 of their theatres across Canada.

Talking to CBC, Pat Marshall, Cineplex's vice-president of communications said that Cineplex theatres will have "about 12 to 24 hours" of available rental hours each week, and that they will have more available time come September.

Each theatre will provide an Xbox 360 console, four wireless controllers, and an in-house library of Xbox 360 games to play. Renters will also have the option to bring their own games to the party.

At least initially, Cineplex has partnered exclusively with Microsoft's Xbox 360, so gamers looking to play Wii or PS3 titles are out of luck. But let's look on the bright side, now at least we can all watch our Viva Piñata's
'romance dance' on 50 foot tall screens!