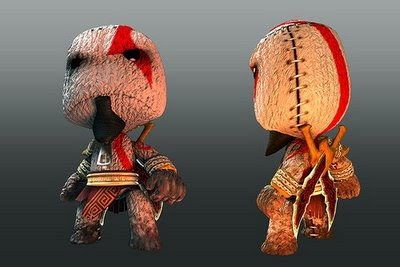 Last week on the Official Playstation Blog, Mark Valledor, SCEA Marketing Manager, announced a whole slew of LittleBigPlanet pre-order promotional giveaways and I salivated. A few seconds later when I realized these giveaways were U.S. only, I sobbed. Fortunately, Media Molecule didn't want to a see a grown man cry, and have announced on the Official LittleBigPlanet blog that Canada will also have pre-order campaigns. Two in fact! Oh sure, our U.S. brethren will be getting five pre-order campaigns - but hey, at least we're not completely left in the cold.

Okay, so sure I could be pissed that I won't be able to get my hands on a LittleBigPouch, instead though, I think I'll consider myself fortunate that come launch day, I'll be able to dress my Sackboy with Kratos' signature goatee and the Blades of Athena.

If you're interested in scoring yourself a free Kratos downloadable SackBoy or a Nariko downloadable SackGirl, get your O Canada ass down to your local EB Games. They should be taking pre-orders in Canada right now.
Platformer Pre-order Promotion PS3