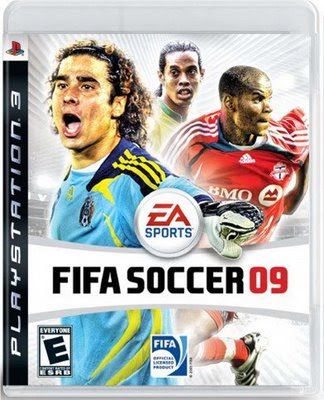 In a press release today, EA announced that Toronto FC soccer player Maurice Edu will be gracing the cover of the FIFA Soccer 09.

Electronic Arts today announced that Toronto FC star Maurice Edu is taking his game to the cover of the world’s most popular soccer videogame where he will join Brazilian International Ronaldinho and Mexican national team goalkeeper Guillermo Ochoa as cover athletes and spokespersons for EA SPORTS™ FIFA Soccer 09 in the United States, Canada and other regions in North America.

Edu will also become the first and only Major League Soccer player to appear as a customized Mii™ character exclusively for the Wii™ home video game system in FIFA Soccer 09 All-Play. EA SPORTS has created a unique version of Edu and his character will be playable alongside some of the world’s biggest soccer stars, including Ronaldinho, Wayne Rooney, Franck Ribéry and others— all created as special Mii characters exclusively for FIFA Soccer 09 All-Play.

“I got a kick out of my Mii because it looks like he has a lot of fun on the pitch and he’s capable of pulling off some wild moves,” said Edu. “It’s fun to take control of my character and blast outrageous shots on goal with a flick of the wrist. I’ve never played soccer like this before.”

One of the rising stars of MLS and the U.S. Men’s National Team, Edu is in his second season with Toronto FC after being selected first overall in the 2007 MLS Superdraft and then being named MLS Rookie of the Year. Edu has earned caps with the US National Team and is currently training with the U.S. Under-23 Men’s National Team in Beijing. The 22-year-old midfielder was born and raised in Fontana, California, and prior to joining Toronto FC, played three seasons at the University of Maryland, winning the NCAA National Championship in 2005.

Earlier this month Edu participated in a body motion capture session with the EA SPORTS FIFA Soccer 09 videogame development team at EA Canada in Burnaby, British Columbia. During the session Edu’s body movements, individual moves and playing style were captured and digitized, and will become the life-like movement of his virtual self in FIFA Soccer 09 and future versions of the game.
Nintendo DS PS3 PSP Sports Wii Xbox 360