And the Newest Member is... 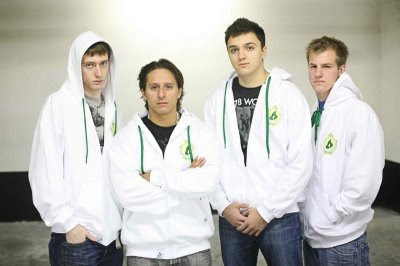 Mississauga, ON – October 29, 2008 – After a nationwide search for Canada’s best gamer, the Amp Energy Pro Team, North of 49, is pleased to announce that they have chosen Calgary’s Aleksandar Djukanovic (gamer tag: Importedd) to join the team as its fourth member. The announcement follows the completion of the team’s auditions held this summer during the Amp Your Game competition.

Amp Your Game, Canada’s biggest gaming tour, served as a unique platform for Canada’s first-ever sponsored pro team to audition gaming hopefuls in nine major cities and online this summer. It provided a rare and coveted opportunity for one lucky gamer to win a spot on the team and become a professional.

“When we met Aleksandar at the Calgary auditions we were immediately impressed with his unique strategies and skill on Halo 3,” said Nelson Triana, team captain. “With him on board, the Amp Energy team will be a real gaming force to be reckoned with.”

A resident of Calgary, Aleksandar, has quickly established himself as a talented gamer with several impressive gaming credits. Most notably, he was voted Player of the Year in Canada’s premier Pro Gaming League (PGL) and finished in the Top 16 at a Major League Gaming (MLG) Pro Circuit event in July 2008. Born in Belgrade, Serbia in 1989, Aleksandar moved to Canada in 2000.

“Amp Energy provided the pro team with a platform that brought an enthusiastic community of gamers together through the tour’s Search for the Pro competitions. We were blown away by the response and the quality of talent,” said Dale Hooper, Vice-President of Marketing, Pepsi-QTG Canada. “Amp Your Game proved to be a groundbreaking gaming tour that resulted in the discovery of one of the best gamers in Canada.”

With the winner now selected, the Amp Energy Pro Team, North of 49, is: Nelson Triana (gamer tag: G-SpOt); Leo Vitelli (gamer tag: Alpha XFactor); Matthew Warkentin (gamer tag: FURIEN) and Aleksandar Djukanovic (gamer tag: Importedd). The team plans to prove that it is one of the best in North America when it makes its debut at Festival Arcadia in Montreal, November 7-9, 2008. The now-complete team is undergoing a two-week training boot camp in Toronto to prepare for its first professional competition as the Amp Energy Pro Team.

About Amp Your Game
At 3,500 square feet, Amp Your Game was the biggest national gaming tour Canada had ever seen. Beginning in Halifax on June 12, 2008, Amp Your Game stopped in nine major cities from coast-to-coast and auditioned over 1,300 gamers for their chance to be named the fourth member of the Amp Energy Pro Team and receive an endorsement from Amp Energy. Amp Your Game was also an entertainment mecca featuring 80 gaming stations with the most popular games for all skill levels; a live DJ; celebrity appearances; and organized tournaments.