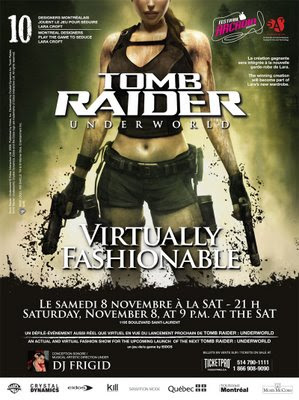 When it comes to original, awesome video game events, Canada is a global leader. Don't believe me? Perhaps this will convince you:

I received a note from Festival Arcadia today announcing that at the premiere gaming event they will be hosting a Virtually Fashionable runway show featuring the star of the upcoming Eidos Tomb Raider: Underworld game - Lara Croft.

According to the press release, the fashion show will feature "ten of Quebec’s best-known fashion designers are creating costumes for famed videogame icon Lara Croft. Two of these outfits will be incorporated into Lara’s official wardrobe as downloadable content for Tomb Raider: Underworld post launch."

"Attendees of Virtually Fashionable will get to see the designs on real life and virtual models as they strut down the catwalk to music mixed by event sound designer Frigid. After the show, a jury that includes Cynthia Cooper, Curator of the McCord Museum, Herby Moreau, host and journalist, Stephane Le Duc, Editor of Dress to Kill Magazine, and Sandrine Belleteste, fashion consultant, will decide on one outfit that will be incorporated into Lara’s official wardrobe, with the designer taking home a $3,000 purse. A second outfit will be chosen by the public and both will be made available for download via Xbox LIVE so gamers will have the chance to play through the entire Tomb Raider: Underworld experience in a new award-winning outfit."

See, where else but Canada would have such a kick ass home-grown gaming event? No matter how you mix Lara Croft, fashion consultants, and a catwalk you always equal 100% awesome. Trust me, I've calculated all possible permutations.

If you're interested in what else Festival Arcadia will be offering, check out the program here.
Competition Fashion Gaming Event