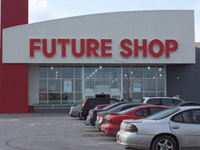 Last month we posted about the Future Shop Wii NHL 2K9 in-store tournament, and if you recall, I was supposed to be present at the Yonge & Dundas event in Toronto.

Long story short, the tournament was at 11:00am on November 1 - the day after Halloween - and unfortunately I had been partying the night before in my NWO Hulk Hogan outfit and wasn't feeling up to attending. Perhaps before going to bed I should I have trained, said my prayers and ate my vitamins. A lesson learned hard I supposed.

Maybe because they screwed up the registration or maybe because they are a truly empathetic bunch, I received an email from the tournament organizers letting me know I could still participate in the Wii NHL 2K9 tournament at the Future Shop Heartland location on November 22. Sw-eeeeet! Naturally I jumped at the (second) chance.

As it turns out, I was quickly thrust into a head-to-head match with my friend Mike. Neither one of us had previous experience playing the game, so it resulted in a who can figure out the controls first match-up. The winner of the match would receive a $25 gift card at Future Shop. I had Mike reeling with an early goal in first period. My main advantage at this point was that Mike didn't know to press the B button and shake the Wii-Remote to win face-offs. Normally in good sportsmanship I would tell him this control mechanic, but this was who can figure out the controls first match-up. It was every man for himself.

Through determination, Mike had the basics of Wii-remote passing understood by the second period (a skill I could not grasp, apparently) and he scored a goal at the half-way point making the match an even 1-1.

Alas, in the third period Mike successfully scored a second goal from the blue line and I would not recover. Mike won the competition a respectable 2-1. For his efforts, Mike was awarded a $25 gift card at Future Shop. As part of the ceremonial awarding of the gift certificate, Mike had his picture taken with one of the event organizers: Look at that big grin. He's so happy to have kicked my ass.

If I had to do it again, I would have insisted the organizers turn on the Wii-remote on ice fighting. Losing would have been much more entertaining had I been able to throw a few punches before the final buzzer. I really wanted to sample Wii-Remote + Nunchuk fisticuffs action, but I was denied this obvious pleasure.

While I was there I took photos of the semi-final and finals match that occurred after Mike's win. For the complete photo reel, check out our Flickr set here: