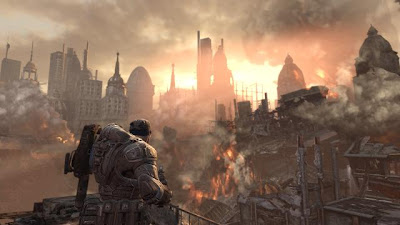 Ever since the Gears of War 2 teaser trailer was shown at E3 earlier this year, I had been patiently awaiting its release so that I could continue the fantastic game and story that was Gears of War. Add to that all of the hype that surrounded Gears of War 2 during the summer months and my expectations were set quite high.

Since its launch in early November, I’ve had the opportunity to spend quite a bit of time with the game. I’ve gone through the game in single player, co-op and have played a fair bit of multiplayer. Overall, Gears 2 delivers on many of its hyped promises. The new Unreal Engine is just fantastic. The character models are as detailed and photorealistic as I’ve ever seen in a game. The environments are massive and give a sense of a free roaming type of game even though it is quite linear. The gameplay mechanics are obviously quite familiar to the original – a huge plus...really, no need to fix something that isn’t broke. Voice acting, sound effects and musical score are top notch.

Let’s begin with what makes this game great.

The thing I enjoyed overall was the familiar gameplay. No one does cover mechanics like Gears and it was no different in this game. In fact, I felt that much of the level design in Gears 2 promoted the cover approach to progress through them. The controls are smooth and responsive. The aiming mechanics feel accurately responsive and the sensitivity seems just right (at least in the default settings).

The weapons in Gears 2 are stellar. You have your familiar Lancer, shotgun, sniper rifle, Hammerburst rifle, torque bow, grenades, etc. Some new weapons include the mortar, the mulcher (a heavy duty chain gun), and the ever fun flame thrower. Aside from the new weapons, there are also new ways to use old weapons. With the Lancer, you can now enter into chainsaw battles with an enemy that decides to attack with a Lancer themselves. Once you get into this scenario, it becomes a battle of who can tap the B button the quickest. This is a fun little ‘mini-game’ if you will. In the single player campaign, you’d be lucky to encounter this even once, however in multiplayer, there are more opportunities to duke it out with someone online. The other new use of an old weapon is being able to tag grenades to objects like building walls, concrete pillars, etc. and use them as proximity mines. There’s nothing like watching your unsuspecting enemy splatter as they walk by one of them.

New attack moves have been added in Gears 2. You now have various ways to execute an injured and crawling enemy. Aside from the familiar head stomp, there are a number different ways to take out your Horde nemesis. My favourite is the flip them on their back and beat their face in with your fists move. So satisfying.

Production values are very high in quality. The voice acting and sound effects are solid. The musical score does a great job of setting the tone and atmosphere throughout the game. Majority of the levels are well designed and allow from some great and intense fire fights – both open and closed. Especially the levels that take place underground with collapsed cities. On top of all that, the story for Gears 2 does a good job of continuing where it left off at the end of Gears of War and setting up what is likely going to be the wrap up if and likely when Gears 3 comes out. Whenever that will be...hopefully not too far off from now. I also enjoyed the inclusion of new characters and like Tai and the Horde Queen and also being able to battle against new enemies like the Brumaks. I also enjoyed the way they provided more insight into Dom’s life with the side story of his wife Maria as well as revealing more about Marcus and his father Adam Fenix.

And last but not least, the co-op and multiplayer gameplay are superbly fun. Playing the campaign in co-op mode is so easy to set up, especially with the drop-in ability. Teaming up with a buddy to go through the entire game provides added variety and some instances of true co-operative play that you can’t experience in single player mode. Multiplayer also adds to the pluses with new modes like Elimination and Submission. I really like Submission as it is a take on the traditional capture the flag mode. However, in Submission, the ‘flag’ is a civilian who is armed and will try to fight off anyone who tries to capture him. This makes for an interesting challenge. And then there’s Horde mode. Here you and 4 others get together to fight off wave after wave of increasing numbers of Locust enemies. The goal is to try and advance through as much waves as possible. The waves go up to 50. No easy feat...trust me.

So far so good right? All this praise and what’s my gripe you ask?

It’s really just one thing. I felt that the game was almost too easy to play through (and remember, I played through the game starting with Hardcore difficulty). When I compare it to playing through the first Gears of War, Gears 2 just didn’t feel challenging enough. Of course, there were 2 or 3 instances in the game where I had some difficulty to get through it, but other than that, much of the battle sequences were completed with little difficulty and most of the boss fights were a breeze once you figured out some predictable pattern. Example given would be the Skorge boss fight as well as the final boss fight with the Imulsion mutated Brumak. Even the interesting and promising level that takes place inside of the city levelling Riftworm ended up being somewhat disappointing. I can’t help but feel like this level took a page out of the Flood level in Halo 3.

In the end, even with the one knock above, I’m very impressed with Gears of War 2. All of the new additions in gameplay, weapons, game mode combined with the very impressive production elements makes for a game that in my opinion should be experienced by all. Gears of War 2 will no doubt be categorized as one of the best games of 2008.