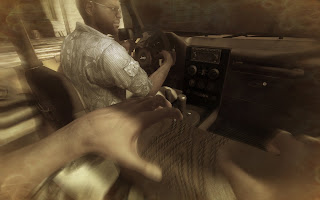 Marty Allencar here. I've arrived at the airport, if you can even call it that. Looked more like a dirt strip to me. Managed to get a cab to the hotel in Pala. The driver talked for most of the ride. I guess he didn't take my silence as a hint. Apparently the country is in the process of being locked down, based on the checkpoints we drove through. We managed to make it through, but shortly after that my vision started to swim and I had difficulty breathing. I'm not really sure what happened after I blacked out, but when I woke up I was in the hotel with with my prime target standing over me. The Jackal (as he's known internationally) seemed calm to be in a room with his would-be assassin. Given my raging malaria, I guess I didn't seem very threatening. He rattled off some vague quotations and left me with a machete buried in the wall next to my head. 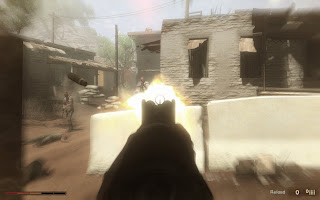 Things got really dicey after that. Apparently the ceasefire between the APR and the UFLL is off in Pala, because the two sides started tearing into each other with the locals caught in the middle. I stumbled out of my hotel room only to catch a bullet in my left arm and hit the ground like a sack of bricks for the second time in one day. Someone must have dragged me to safety. As a result, I'm indebted to the APR. I can't see any way out of helping them for now. Maybe I can get a lead on where the Jackal is. More later, I've got to get back to work.
Action Adventure FPS PC PS3 Xbox 360