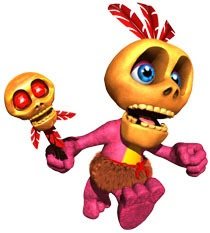 Long before they were tasked with creating avatars for your Xbox 360, a little company called Rare made some fantastic games. If you owned a SNES or N64, odds are you played one of their games, and likely more than just one. The list has so many hits it seems unlikely that they could all come from one company. Donkey Kong Country, Killer Instinct, GoldenEye, Perfect Dark…these are games still revered by many who may have grown out of their Nintendo worship, but look back fondly on these titles.

For some, the pinnacle of these efforts came in 1998 on the N64 with a game called Banjo-Kazooie. A platformer on the style of Mario 64 (with several gameplay improvements), the game was incredibly well received and went on to become one of the best selling titles of that generation for Nintendo. But enough back story, the question for today is how well does the XBLA HD Remix Super Turbo Hyper Fighting remake of Banjo hold up?

Full disclosure: I played Banjo-Kazooie for the first time this week. I don’t have any memories of crazy fun all-night gaming sessions on my N64, collecting musical notes and jigsaw pieces. I didn’t even own a N64. But maybe that’s a good thing, right? Perhaps my judgement of the remake won’t be clouded by loyalty to childhood memories.

What it breaks down to is this; Banjo-Kazooie is a game for two kinds of gamers. Those who love the platforming genre and those who can’t resist collection objectives. The first aspect is done very well; there are several unique levels for the intrepid Bear and Bird combo to explore, and each one has different challenges to take on. Comparisons to Mario 64 are inevitable, as it feels very similar to the N64 launch title, but is such a comparison anything but a compliment? Banjo and Kazooie have a larger variety of moves available to them, and some of the imprecision that was present in Mario 64’s controls seem to have been addressed in BK. This allows for levels with all sorts of things to climb on, jump onto, fly around or swim in.

As for the collection objectives, there is a seemingly endless list of items to find. Some are linked to game progression, others will allow you to change into a different animal for a time, allowing access to new areas and even more hidden goodies. I liked how the game didn’t force me to track down every last musical note or jigsaw piece to complete it, but if I wanted to do that, the option (and accompanying achievement points) was there.

Oddly enough, the variance in your moves and level structure make the game seem competitive even in today’s world of Mario Galaxy and others in the platforming genre. Still, it looks a little dated even with the graphics having been cleaned up, there’s no getting around that. I noticed some severe frame rate drops happening on a fairly regular basis, particularly any time I went near water. This was corrected by a patch released on December 3rd 2008, the day the title became available to anyone who didn’t preorder Banjo-Kazooie: Nuts and Bolts (and thus got BK XBLA as a free bonus). Since they managed to get this patch out on day 1, I won’t hold it against them when it comes to the final review score.

The real question that I tend to ask when I check out the XBLA titles is “is this worth my money?” Not exactly an original concept, but the amount of games being released on Live lately, combined with a serious Rock Band DLC addiction means that I have to be discriminating in where I spend my money, and consequently, what I recommend to the faithful NGP reader. Banjo-Kazooie is priced at 1200 MS Points, or roughly $15. I might just be a cheap student, but $15 is the price point at which a game transitions between impulse purchase and serious consideration for me. Like I said earlier, I have no special place in my heart for BK. As such, it is hard to reconcile the cost of this game with the actual product. If it had been $10, I would have said dive in. That said; if BK was part of your N64 glory days, then go for it. You’ll probably fall in love with it all over again, regardless of what your wallet thinks. If you’re new to the franchise though, you might want to wait for a sale down the road.