And So Our Story Continues? Fable 2: Knothole Island Impressions 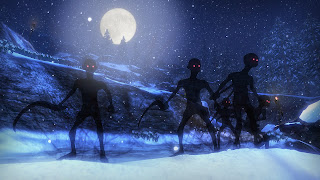 Warning: This article contains references to the various endings of Fable 2, as well as some events in Knothole Island. Those who wish to experience the game without spoilers should probably skip this article.

As our Top Games of 2008 post showed earlier this year, the NextGen Player team was quite fond of Fable 2 for Xbox 360. Personally, I loved the art style and humour of the game, but what really grabbed me was the storytelling. I was excited to hear about the planned DLC, especially when Lionhead said they would have it out for the Christmas break, which happens to be the time when many of us have MS points burning holes in our virtual wallets. After the unfortunate delay of the DLC until January, some of my eagerness evaporated as I fell into the clutches of "that other game".

But new content has arrived nonetheless, in the form of "Knothole Island." It seems that your hero has learned of a new opportunity to save the day (or ruin it), and what adventurer worth his/her salt could resist such a call?

At first glance, Knothole Island appears to have a lot going for it. You'll almost immediately be presented with new items to make you taller, fatter, thinner, better-looking, etc. I have to applaud Lionhead here, they seem to have listened to the fans' concerns about character appearance and addressed them with these items. You should be able to give your avatar the look you've been trying to get since the original game. Even your faithful mutt (if he's still around) can look his best with a dashing new bow-tie collar.

Freshly attired, I sought what any great adventurer seeks, a danger-ridden quest to test my skill once more! After speaking with Knothole's town Chieftain, I learned the local residents were experiencing a prolonged bout of inclement weather. I set out at once to a nearby shrine, where I was to obtain an item sure to rectify this chilly misfortune.

The problem with this DLC is that my previous paragraph essentially describes the only quest you'll be doing, albeit with 3 seasonal variations. This ends up feeling a little on the thin side. New items and customization options are nice, but I hope I'm not presumptuous in assuming that what most players want are exciting new quests to tackle. As it stands, you'll probably blow through this DLC in 3 hours or less, which is way too short for the 800 MS points you'll have to pay to experience it.

The real issue with this DLC isn't a lack of quests though. As you may have heard, Knothole Island contains a way of reviving your possibly dead doggie, depending on the ending you chose for the original game. I can understand that potentially thousands of grieving dog-parents are going to be thrilled to hear this, but I say to those people...shame on you for not choosing the dog-friendly ending in the first place! In all seriousness though, I feel it was a mistake to include this feature in the DLC. When Fable 2 was being shown and hyped prior to release, how many times did we hear that the choices we make in the game will have drastic, lasting consequences? What is the point of creating an ending that caused a genuine emotional response in gamers when it can be undone by spending 800 points? Doesn't that undermine the whole idea of action/consequence?

If you've been craving more Fable 2, then go ahead and get this DLC. Just know that you aren't buying a continuation of your hero's narrative, but rather a trip to the mall with some very light questing along the way.
Action RPG DLC NextGen Player DLC Review Xbox 360