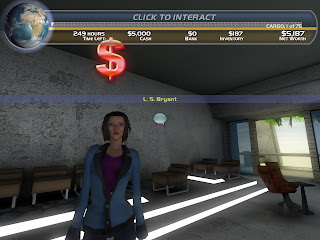 If you had to find a common thread between games that stand out as successes, one possible link might be the feeling that from very early on in the development process, the creators had laid out a path for where their game was going to go, and what the finished product would look like. Since I'm not a game designer myself, perhaps it's even naive to assume predictions of that nature can exist. When a game clearly lacks this sort of direction however, it can ruin the experience as a whole. Unfortunately, such is the case with Space Trader, a 2007 indie release for PC.

Space Trader starts out with a lot of promise. You're introduced to the world of galactic commodity trading, given some cash to play around with and shown how the economies of various markets work. It reminded me of a free game I used to play in high school called "Dope Wars" where your character would run around in various international cities selling illicit products and tangling with the law. If Space Trader had stuck to this one theme of buying and selling goods from merchants, I think it would have been a stronger game.

The problem arises when you are tasked with chasing down random people in a first-person shooter environment. It's as if at some point in the development process, someone piped up and said "hey guys, we're making a game about economics...should we throw some guns in there just in case?" This sort of tacked-on concept can been seen in many games, but it really detracts from the experience in this case because the FPS sequences are very flawed. Within 2 seconds of the start of these sequences, y 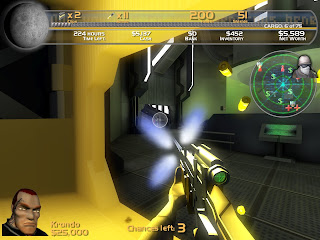 ou will likely be shot. Repeatedly. There is no time to familiarize yourself with the controls or movement (which reminded me of a puck sliding on an air hockey table) because you are constantly being reminded that your target is escaping, so these missions tend to turn into "can I gun down the main dude before his thugs kill me 3 times?" There's no reward for stealth or trying to approach a fight creatively, because the AI knows where you are from minute one.

Space Trader didn't need to have FPS sequences. It could have been a small niche title about trading and likely had the same response to the product. I can't see people picking this game up for an engaging combat experience, unless they are completely unfamiliar with bigger-name FPS games. When you look at the game as a whole, you're left with a few positive qualities (the trading itself is enjoyable) weighed down by a myriad of negatives (bland NPCs and environments, terrible voice acting, dated visuals and pointless combat sequences.) As such, it's hard to recommend Space Trader, even at the $10 price point it's currently going for on Steam.