On February 5 the demo for the hotly anticipated Halo Wars will be released on Xbox Live. In anticipation of this exciting release, Xbox Canada has graciously given NextGen Player a hands-on sneak peak of Halo Wars.

Once you fire up the demo, you'll be greeted with very familiar sights and sounds. The title screen presentation is very similar to Halo 3, with the same font and an updated menu theme. The audio is the familiar Halo theme song we've grown so fond of over the years. Make no mistake about it, this is a Halo game through-and-through.

The games is set 20 years before the events of Halo: Combat Evolved, and from the demo, looks like it stars Sergeant John Forge, a war torn commander sent to a former United Nations Space Command (UNSC) colony named Harvest. For those of you familiar with Halo lore this is the same colony featured in the New York Times bestseller book Halo: Contact Harvest.

From the moment you start the Campaign Mode you're instantly greeted with some exceptionally good CG cutscenes that set the stage for the epic battles that will soon ensue. The plot begins on board the Spirit of Fire, a UNSC spaceship lead by Captain James Cutter that oversees and assists Sgt. Forge's ground assault. Your first mission is to help scattered groups of pinned-down soldiers and retake Alpha Base, a stronghold now occupied by the Covenant. 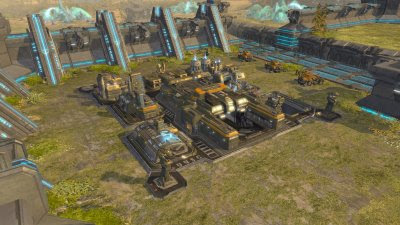 After the cutscene concludes, you're given control of Sgt. Forge to set forth on your mission. Alpha Base is located in a cold, snowy land full of many peaks and frozen lakes. The graphics, while serviceable, are very average (especially for FPS fans who are used to playing flagship Xbox 360 titles such as Gears of War 2 or Halo 3).

Fans of the Halo series will enjoy the broad mix of units available in the game. All your favourite UNSC military vehicles are present, including Scorpion tanks, the anti-vehicle Cobra, and air units such as the Hornet and the Wolverine. Perhaps my favourite Halo vehicle, the Warthog, can also be produced for recon missions. The UNSC also can train three types of infantry units: marine squads, flamethrowers, and obligatory Spartans. Ensemble Studios were quite successful at replicating not only the right characteristics for each unit (for example, Spartans have a shield bar as well as a health bar) they also mimicked the look-and-feel of each unit just right (for example, Warthogs sputter around with erratic suspension).

The soundtrack and audio effects in Halo Wars are definitely great. All the familiar Halo series soundbytes are present, from the sound of assault rifle blasts, Spartan Laser zaps, and sticky grenade booms. The Covenant sounds are also well done and hearing your Grunt Scouts yell "Go here, Go there" and "Okie Dokie!" never gets tiring.

While there are many selection options available, Halo Wars still has that clunky controller RTS feel and you'll often find yourself struggling to properly select and position your units for battle. The strategic complexities found in traditional RTS's are simply lost in this game. I often found myself defaulting to the 'select all' button and paid little attention to my unit formations. 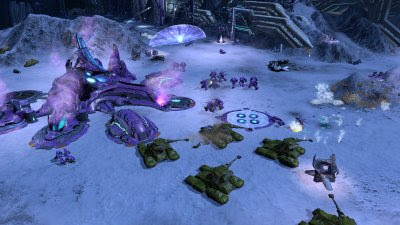 The game offers three difficulty modes: Easy, Normal, Heroic. Even on the hardest difficulty you'll find yourself breezing through the two available missions very comfortably. The AI rarely mounts attack on your own bases, leaving you free to build your base and army uninterrupted. Battle encounters generally result in an easy-win with minimal casualties. It's feels as though Halo Wars was intentionally designed as an 'RTS Lite' and is targeted to Halo 3 fans who may be new to the RTS genre. Perhaps that's why the game feels much more action-oriented then RTS mainstays such as Command & Conquer and Starcraft.

The demo also contains a Tutorial Mode where you learn the basics of gathering, building, attacking and upgrading. A third mode in the game, Skirmish, pits you against an AI opponent in a 1v1 free-for-all. The one available Skirmish map in the demo, Chasm, is a small, icy cold battlefield with four locations to set-up your base. Unfortunately, the AI in Skirmish Mode are just as soft as in the campaign, and you'll find yourself under very little threat of defeat (even on Heroic difficulty). 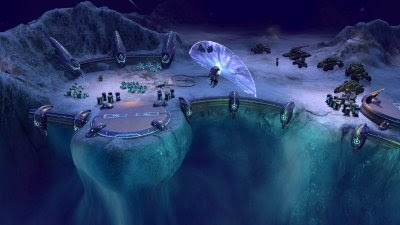 Overall, while I was a little ambivalent towards my experience with the demo, the full game promises much more. The retail game (releasing on March 3) will include a full Campaign Mode that can be played solo or co-op online. Skirmish matches against human opponents should provide a better challenge, and with 14 maps included there should be a lot of variety. While the game might not appeal to hardcore RTS fans, newcomers to this genre might be find this game to be an excellent introduction. If you're a fan of Halo, then I definitely encourage you to check out the demo in two short days.

For me though, I think I'll sit tight until Halo 3: ODST releases this fall.
Demo NextGen Player Preview RTS Xbox 360