An Interview with Scott Dossett of Epic Games 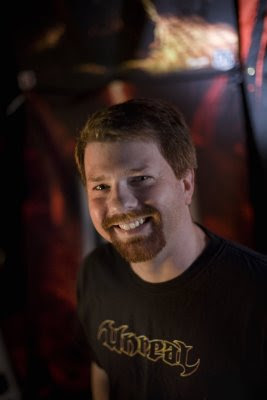 The 2009 VFS Game Design Expo wrapped up on Sunday, bringing to a close two very intense days of presentations, panels, hands-on demos and an endless supply of muffins.

I was on hand to attend both the industry speaker day held on Saturday, February 7th and the Vancouver Film School open house on Sunday the 8th. The line-up of industry pros selected to deliver lectures was a varied assortment of business leaders and design auteurs from the likes of Ubisoft, EA, Microsoft and more. Each of them brought something unique to the table, revealing another magical piece of the game development puzzle one moment, and in the next introducing another challenge yet to be overcome by the next generation of game creators.

Among these industry heavyweights was Scott Dossett, the senior animator at Epic Games. His talk was titled, "Reinventing the Chainsaw: Cinematic Pipeline for Gears of War 2". Not surprisingly, the presentation featured a lot of Gears of War 2 footage as well as an amusing behind-the-scenes look at the motion-capture techniques used to create the epic cutscenes that are the hallmark of the series.

NextGen Player caught up with Scott before the start of the Game Design Expo and we asked him to share some insights about his craft.

NextGen Player: One of the most important hallmarks of the Gears of War franchise is the quality of the animation of Marcus Fenix and the Locust. How were you able to perpetuate the amazing work done on the previous games for Gears of War 2?

Scott Dossett: For the original Gears of War’s animations, our goal was to make sure Marcus’ actions looked deliberate and confident, and to avoid anything that felt awkward. It’s a simple concept, but it was fairly complex to implement.

For Gears 2, we continued with that philosophy but added more transitions, more random breaks, and more of a sense of determination in his movement. We even hired local actors to play ongoing roles for cinematic content, and that decision added consistency and dramatically impacted the cinematics.

NGP: While working on the Gears of War series, did you aim to mimic "realistic" movements for the various characters or did you prefer to establish your own rules for presenting realism within the game?

For our motion captured movements, we start with a realistic base and exaggerate it to match the stylized world. While we don’t want anything to look boring, we’re also aware that movements that are too stylized detract from believability and immersion, so we have to walk that fine line.

NGP: Do you think it's possible to make animations too realistic to the point where viewers become hyper aware of flaws or inconsistencies? Is the 'uncanny valley' a problem animators share with other specialists, like 3D modelers and texture artists?

Scott: It seems like it's more of a lack of humanistic flaws, or making something move too perfect, that causes the uncanny valley. Our characters and animations are exaggerated and stylized enough that we don't really hit that point. But the uncanny valley is an issue shared by many disciplines: modeling, texturing, animation, and so on.

We try to put enough humanistic imperfections into our animations to make them believable, but our goal has been to hit the peak just before the valley; as long as we keep that in mind, we’re confident that we won’t fall into it.

NGP: Your job involves managing a 2,500 square foot motion capture studio. Do you see games animation increasingly sharing techniques used in film or is procedural animation going to mark the next big transition for digital artists?

Scott: Games and movies are both art forms that share common ground. It seems like a natural progression that the two industries will increasingly share many tools, techniques and pipelines.

Motion capture is just a tool, like a paint brush or a sculpting knife. The programming behind procedural animation is a tool as well. The important thing is to make sure that you use the proper tool for the medium, and that you have the proper talent behind the tool.

NGP: In your role as Senior Animator on Gears 2, were you responsible for overseeing the implementation of additional animation features for the Unreal Engine 3? How were these features implemented in the game?

Scott: Epic has a dedicated team of developers working on different parts of Unreal Engine 3 at all times, so these tasks don't just fall onto the senior staff. For Gears 2, I often worked in Matinee (our engine's nonlinear editor), and was able to collaborate with the engine programmers to help implement quite a few improvements and fixes to it. These improvements offered better pathing for in-game vehicles, and helped in the creation of cinematics.

NGP: After your experience with Gears of War 2, were there any lessons learned to help further develop and improve the Unreal Engine?

Scott: Sure, the Unreal Engine is always evolving based on our needs as well as lessons learned from shipped games. Matinee will be regularly upgraded, and the animation importer will continue to change and improve. And, we have plans to add some completely new animation tools in the future.

NGP: What key pieces of advice do you have for aspiring young animators looking to break into games?

Scott: It takes a lot of hard work and a special eye to be able to analyze and break down the movement of something, and then rebuild it in a different medium, and then stylize it.

Observe your surroundings, and always watch how the people and things around you move in real life. Not just walk cycles, but expressions, emotions and interactions. Now I sound like Yoda. "Between you ...the rock ...and the ship" :)

But seriously, observe your surroundings and apply that to your animations, and that will help you create believable, compelling animations, whether they are stylized or not.


NextGen Player would like to thank Scott Dossett for taking the time out to give us a small glimpse of what's involved in the gargantuan task of animating assets for today's triple-A video games.