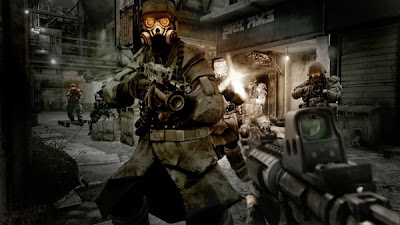 I'm sure many of you out there much like myself have been wondering if the hype surrounding Killzone 2 is true. While I'll wait until the retail version is available to pass final judgement, I did have a chance to test out the demo (made available to those who pre-ordered the game from EB Games/Gamestop in Canada). Allow me to provide my take on Guerilla Games’ latest foray into the FPS segment with the brief 15 minute experience that the demo provided.

The first thing you notice when you load the game are the pristine graphics. It is not an exaggeration to say this is the best looking game to ever hit consoles. It very well could be. The game looks like it’s pre-rendered, and the frame rate is fast and smooth. The hud eats up very little space so you’re left to enjoy the view as if it was through your own eyes. A lot of comparisons are being thrown towards the Unreal Engine 3 powered Gears of War 2, which due to awesome production values looked incredible. But there is something about the Killzone 2 visuals that are distinctly PS3 and set it above Gears 2. Whereas Gears 2 characters look solid in the 3D space, Killzone 2 looks almost as if it has been graded like a war film. This gives the game such a bleak beauty that it's hard not to stare in the middle of a firefight. Your depth of field changes when you reload and fire, and explosions are bright and utterly realistic.

The character animations of assault rifle victims, which are such a mainstay in the games' marketing, add so much to the experience during a battle. With bodies flailing in defeat, it's satisfying to squeeze off a few more rounds as they fall. The camera never impedes character movement, and the way you bob and weave through obstacles, ducking in and out of cover to attack, all help it come together even more.

Sound is also excellent in full 7.1 surround, which is almost a necessity so you can pinpoint where an errant grenade may have landed by the “tick-tick-tick” sound it makes, or for locating your squad mates.

I’m not usually a fan of FPS on the PS3, primarily because I find the controller a bit awkward for FPS fragfests. When a multi-platform FPS is released I’m usually inclined to get the XBOX 360 version simply because the controller is more attune to this form of gaming. That being said, control is solid and tight in Killzone 2, but for 360 vets you may want to increase the look sensitivity slightly as the default setting is a bit slow at targeting the various Helghast running around the screen. Button placement is similar to the Resistance series, and takes minimal time getting used to. One thing that is really nice about the gameplay, small though it may be, is that running feels like RUNNING. Tap the left stick down to initiate a sprint and you’re hauling ass across the maps like you stole something. This helps add to the visceral feeling of the game, much like the roadie run did for Gears of War. The physical world of Killzone is filled with exploding fuel barrels and compressed-gas tanks that add a variety of gameplay options for dispatching the ornery red-goggles when they drop in from the ceiling to ruin your day.

As fun as Halo, better looking than Gears 2 and dare I say far exceeds Resistance 2. It’s a straightforward game that has been polished raw, spat on and then polished some more. A simple formula executed perfectly, with emphasis placed entirely on being a fun and immersing experience.