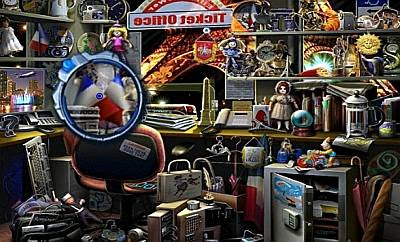 Interpol: The Trail of Dr. Chaos may be considered a welcome change of pace from the twin-stick shooters and old-school revivals that are the staple of the Xbox Live Arcade portfolio. It could just as easily be accused of being an interminable bore for an audience weaned on more fast-paced, stimulating games. After sitting through a few levels of Interpol, I definitely feel that I fall into the latter camp. Interpol is not without its merits, of course, and what makes me stifle yawns may provide a few hours of relaxed distraction for others.

The player takes on the role of a secret agent coaxed out early from their beach side vacation to track down the unfortunately named, Dr. Chaos. The nefarious doctor and his three cronies have escaped the authorities and it's up to you to follow their trail and bring each of these criminals to justice.

And with that barest of premises established, the player is thrust into a globe-spanning mission of intrigue and danger, where sharp observation skills win the day and the fate of the world hangs on your identifying random nick-knacks strewn about some one's messy living room. Uhh, what?

Despite what the flimsy narrative would have you believe, the core of Interpol's game play is that of a seek-and-find puzzle on the order of a Where's Waldo book. I more closely related it to those Photo Hunt touch-screen games that you find in bars, and arcades when there were still any around. Instead of asking you to pick out differences between two similar photographs, you're presented a single scene and given a list of items to find. A single mission is typically comprised of 3 separate scenes and all of them need to be solved within a shared time limit to successfully complete the mission.

Completing a series of missions will culminate in what you might call a "boss fight" but it is in fact just another scene with a stricter time limit and a more specific set of items to secure, such as finding 10 discs hidden around the Statue of Liberty's face. Hey, no one ever said secret agent work had to make much sense.

There's a limited hint system available if you get stumped but there's almost no incentive to not use it unless you are gunning for a top score or an Achievement. True, desperate situations may arise when you've exhausted your hints and you can't nab the last few clues. In all honesty, the time limits are so generous and the scenes so compact, you're bound to get lucky before the clock hits zero. Interpol designers may have been intelligent enough to penalize you for sweeping the cursor around the screen while jamming on the 'A' button but you'll still learn how to beat the system quite easily.

Interpol touches all the bases of a very basic formula. That makes up a big part of its main deficiency as well, because the game does so little to enhance or add to the simplistic core mechanics. They give you a magnifier glass but it's next to useless. The graphics are sprite-based, so all you see magnified are large, blurry pixels that actually deter you from finding the clues. The story, if you haven't yet guessed, is pure window dressing and does little to compel you to the next scene. The writing barely approaches tween levels of sophistication, so if you're like me you'll click right through the text briefings, eager to be on your way.

A trawl through one loosely linked locale after another wouldn't be so bad if the presentation was sound. Interpol is a fairly attractive package that features colourful, hand-drawn graphics reminiscent of the PC point-and-click adventures of yore. Pretty as they are with their ambient background animations, I can't help but feel that they chose the wrong art style for this type of game.

If you're going to ask me to identify representations of real-life objects, your drawings had better be spot on. Unfortunately, most of the scenes in Interpol don't look clear enough to make the act of seeking and finding an enjoyable one. I groaned every time I saw things like "wallet" on the clues list because the artist's representations of such everyday objects were not always up to snuff. Often times I would just find clues by accident, more out of an act of guessing than actually identifying something for what it was.

The visuals simply worked against the purpose of what the game is about and it was enough to turn me off from pressing on further. It's an attractive package to be sure. When they're not hurting your eyes from excessive pixel-hunting, the graphics have a fair amount of character and colour. The audio is also bolstered with a catchy secret agent theme song and some clever ambient sound effects. But when you get down to the core of it, none of the high production values really made for a better game, just a higher price tag.

In fact I wished the developers put less effort into the presentation and their throw-away story and just fine-tuned the basic game play to a razor's edge. I'll go as far to say they could have repackaged a version of Photo Hunt, slapped in Achievements and I would be a happy camper.

As it stands, there are far better games to be had on XBLA for 800 Microsoft Points. Interpol is best suited for more casual gamers who aren't into twitch-based play, competition or a large time investment. It's a "cool down" game of the simplest kind. For more experienced gamers, however, the appeal is limited and your points are probably best spent elsewhere.

Cons:
- Attractive but unclear artwork makes the seek & find harder than it should be
- Throw-away story
- Pace and challenge level may bore experienced gamers
- Overpriced
NextGen Player gives Interpol a...