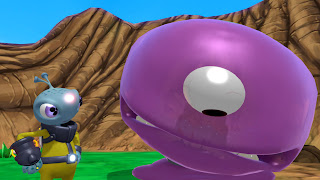 Charming is not a word I would apply to many games these days. It seems that gamers have been bombarded by gritty experiences designed to make our pulses quicken over the last few years. How refreshing then, to play a game like The Maw, where bright colours and silliness are the order the day, rather than visceral disembowelments and gushing wounds.

The Maw doesn't spend a great deal of time on backstory or character development. All you need to know is that you're a blue alien named Frank who looks like he fell off the set of a Pixar movie. You'll soon make the acquaintance of a purple pile o' goo who is only known as The Maw. A fast friendship is formed, which is good news for Frank because the Maw has a tendency to devour everything in his path. Escaping the clutches of the Combine, or ahem..."Galactic Council" as they're known (I defy you to play the game and not think of the Half-Life 2 baddies when you encounter them), you set about exploring stages and watching the Maw eat everything in sight.

The real beauty of the game (aside from the graphics, which are cartoony but very pleasing to the eye), is in the expressions of Frank and the Maw. Frank is not what you'd call a talkative fellow, but manages to communicate his feelings very well through gestures and gasps. The same can be said of The Maw, (despite only possessing 2 rows of teeth, a wagging tongue and a big eyeball), manages to effectively communicate his desires and motivations. It's a fair bet that those motivations are most often, "I want to eat that" and "why aren't I eating that yet?"

Along your trip, you'll discover The Maw can absorb some of the powers of nearby creatures by consuming them. You'll need to make use of these powers to solve puzzles and escape the various environments, all the while watching the Maw grow from the size of a puppy to...well, let's just say he gets quite large before all is said and done.

There are a couple of hiccups I should mention. Controlling the Maw can become a bit tricky as he grows in size, I wouldn't have minded a quicker movement speed for the hungry behemoth. I also encountered a bug on the 2nd to last level that made progression through the level impossible, requiring a restart. These small issues can't take away from what an enjoyable experience The Maw is. I highly recommend this game if you're worn out on blood and guts adventures and just need something that will make you smile.