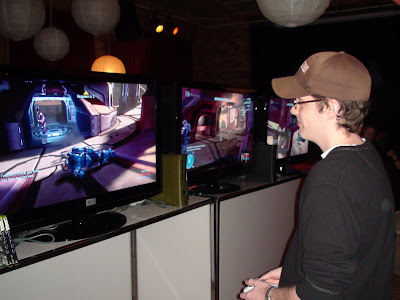 Recently NextGen Player had the opportunity to hang out, have fun and test out the soon to be released Halo 3 Mythic Map Pack at a Halo 3 LAN party that was held in Toronto and hosted by the good folks at Xbox Canada. The Mythic Map Pack will be included with the collector’s edition of the upcoming Halo Wars that is scheduled for launch on March 3rd. Soon afterwards, the new map pack will be available for purchase via XBL.

The event was held at the Gladstone Hotel in the Queen West area of Toronto. Much like other Xbox Canada events, the Halo 3 LAN party provided a great night of gaming as well as the usual great spread of food and...um...beers. But enough about the perks. We were there to game and show off our rusty Halo 3 multiplayer skills. Let’s just say the guys of North of 49 have nothing to worry about...well not anytime soon at least. 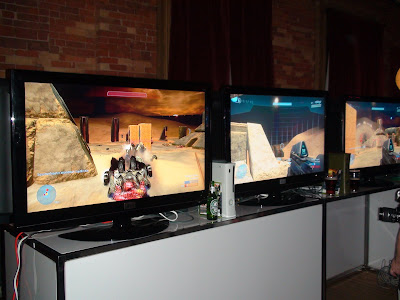 We played quite a bit that evening and overall enjoyed the new maps. The Mythic map pack consists of 3 new maps named Assembly, Sandbox and Orbital.

Assembly is a circular multi-level map with room to run circles or run diagonally from one end to another. It’s a fast paced map where you’ll find yourself constantly running while trying to evade from or take out your opponents.

Sandbox is your standard linear map with bases situated on either end. As per the name, this map has an Egyptian feel to it with pyramid like structures serving as the main bases as well as cover in between. This is a very open map where the use of a sniper rifle can come in handy. As well, since there is a fair amount of open ground to travel on, use of a Wharthog or Chopper is quite effective for running down the opponent.

The last is Orbital. This is a space station layout comprised mostly of hallways and stairs (this is a two level map). Scattered throughout are cube like containers that provide decent cover. There are also some good hiding spots if you can find them.

But why read about these maps when you can view them in action. That’s right, for your viewing pleasure, NextGen Player took HD footage of the new maps in multiplayer action (unfortunately I don't have the Orbital map footage available - for some reason my recording was corrupted).

You can view them by going to our YouTube channel. Links below. Enjoy.