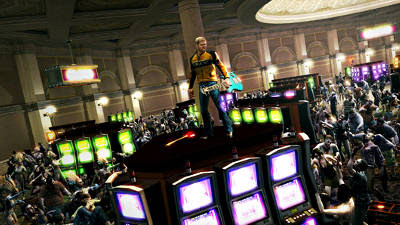 News came today that Blue Castle Games has been contracted to develop the next installment of Capcom's Xbox 360 hit, Dead Rising. The sequel will see a multi-platform release on the 360, Playstation 3 and the PC.

Blue Castle Games was formed in 2005 and is based in Vancouver, BC. They will be taking over development duties on Dead Rising 2 from Capcom's internal studio, Production Studio 1, with Keiji Inafune returning as the producer.

Although Capcom Production Studio 1 will still provide development support, it's a curious and rather inspired choice for Blue Castle to be given the reigns of this young, successful franchise. Blue Castle Games broke onto the scene with their multi-platform release of The BIGS for 2K Sports and most recently released MLB Front Office Manager last month. Going from a stats-heavy sports management simulator to free-form zombie mayhem it hardly a logical progression and a massive creative leap when you consider how off-beat and oddly charming the original Dead Rising was when it came out in late 2006.

Not many details have been revealed about the sequel except that Frank West is no longer the protagonist and the settings will move far beyond that of a mere shopping mall. A release date has not been announced, so you'll need to play... well, take your pick of games now... in order to get your zombie fix for the time being. With any luck, the talented folks at Blue Castle will treat Dead Rising 2 as a great opportunity to reinvent themselves in an entirely new genre of video games.