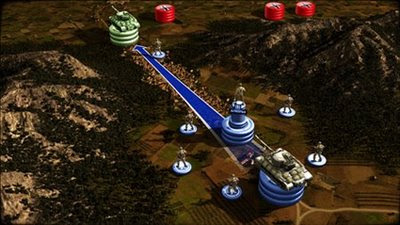 R.U.S.E. was demonstrated today for the first time in public at the Intel booth during the Game Developers Conference in San Francisco.

The game plays upon the theme of deception (thus the title), and will test players' ability to fool and outwit their opponents to victory.

"Deception is present everywhere in our daily lives: in media, politics, even relationships, but we also realized how important it was during wartime.

R.U.S.E. is the game where each player uses their intelligence service to anticipate the moves of their opponent; this makes some information available about the enemy. Deception is also a matter of avoiding being spied on: lying, fainting, hiding, and faking…you’re the only one who decided when it’s time to reveal your real forces!!! That’s like poker!!!"

The game also employs a new proprietary in-game engine called IRISZOOM, which according to Ubisoft will allow for smooth, rapid transitions from a birds-eye view of the entire conflict, down into the heat of the battle and vice versa.

For the debut trailer of R.U.S.E., check out the video courtesy of NextGen Player's YouTube Channel: