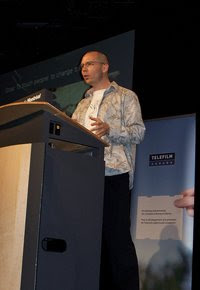 While attending the Montreal International Game Summit in November, I had the opportunity to interview industry luminary Jonathan Blow. He's the guy genius behind the Xbox Live Arcade number one critically acclaimed game of all time, Braid. So why am I only getting around to posting this interview now? That's easy, I'm just so damned lazy. Booyah!

In the interview we explore whether games are moving more towards (or away) from a true artistic medium, a state-of-the-nation discussion on the indie game scene, and of course tons of Braid talk.

While at MIGS, Jonathan Blow gave a thought-provoking keynote speech entitled Fundamental Conflict In Contemporary Game Design and in his typical deep fashion, he proceeded to delve into why gameplay and story in contemporary games naturally fight each other, resulting in structurally unsound experiences.

Jonathan Blow is a real down-to-earth guy and it was a very enlightening conversation. I think you'll really enjoy this interview.

If you're interested in listening to Jonathan Blow's keynote speech at MIGS, you can download the MP3 and the powerpoint slides on the Braid blog here.
NextGen Player Interview Platformer Xbox Live