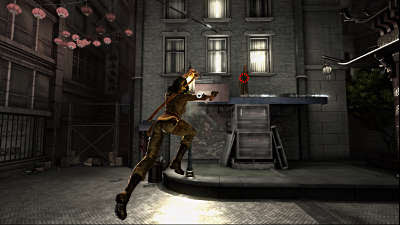 The last time NGP wrote about WET, Montreal-based developer A2M were fresh out of their showing at the Montreal International Game Summit and sharing some juicy details about their upcoming 3rd-person action shooter. They were also in a bit of a limbo, being deep into development on their new game, yet blowing in the inhospitable business winds without a publisher.

At the time we all wondered who would be the first smart cookies to snap up WET. We wondered no more when over the weekend we received a press release outlining some general details about the game and dropping the name "Bethesda Softworks" as the publisher, all but confirming the new arrangement.

I thought it was an inspired choice for Bethesda to publish WET. Widely known for their epic open-world style RPGs, Bethesda could use a touch of diversification in their portfolio that until recently, began and ended with The Elder Scrolls series.

Their lineage encompasses more than that, of course. Back in the 1990s, Bethesda developed a series of first-person shooter games based on the Terminator movie license. The first of these, released in 1990, barely qualified as a FPS and it was absolutely horrid. Later Terminator games fared a lot better but sometime in the mid-90s Bethesda stopped with the man-on-robot shooters, cranked out a couple decent racing games, then focused on developing their RPG legacy.

With the main dev teams at Bethesda surely tied up with various Elder Scrolls and Fallout projects, it really makes sense for them to publish an exciting new IP placed in a genre they aren't really known for at all. Third-person action? The last few Bethesda games have baseline, nearly unplayable third-person camera modes, so it's great for A2M to come in now and patch up this hole in Bethesda's skill set.

Regardless of how the partnership works out in the long-time, it's safe to say this is great news for both A2M and gamers now that WET has the proper support to see a release on Xbox 360 and PS3 sometime in this fall.
Action PS3 Publisher Xbox 360