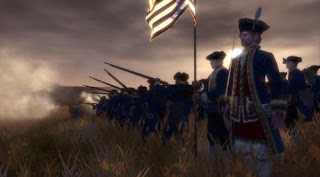 NGP readers, a small apology is needed. Far too much time has passed since our last little chat, and I knew that empty spot in my blogging heart could only be filled by logging on to talk about all the exciting things happening in the world of gaming right now. Let's tuck in, shall we?

1. I cannot believe that I don't have Empire: Total War yet. As a huge fan of the Total War series, a mistake this grave can only be made right by seppuku. Sadly, I'm not into Twilight and therefore have very little interest in cutting myself. How about we just leave it at promising to pick the game up soon, or maybe wishing the Sega Santa will leave us a gift under our tree? Expect a full review when I get my paws on it.

2. Finally finished Resident Evil 5. Slacking, I know. Had to play through with the special lady though, and that meant a slightly slower pace punctuated with lots of deaths and sighing. Still, a fantastic game that I can't wait to get back into so I can unlock some stuff.

3. I have hit that special point in WoW when I realize it has become a tiny bit more than just a casual interest and is now classified as something in-between obsession and part-time job. This is usually followed by a denouement in playing time, which might not be a bad thing given the imminent warmer weather everyone keeps swearing will show up any day now.

4. I bought Call of Duty 4 on Steam this week. What a jump in opponent skill between 360 CoD players and PC. I've gone from a consistent top 3 in matches to middle of the pack at best. CoD4 is definitely my desert island game. You can keep your Killzones and your Halos, I've got weapons to unlock, perks to try and prestige modes to gripe about not being in the PC version. I have no idea how Infinity Ward is going to top it this November.

5. For some reason I thought The Sims 3 was out this month. It's actually not out until June 2nd, assuming no further delays. This makes me sad, although perhaps that's something I should be keeping to myself.

That's all I can think of for now! Hope you were not too bored with my random thoughts, next time things will be "srs bizness" as the idiots in WoW trade chat like to say. Until then, happy gaming!