Miyamoto to be Inducted Into Video Game Hall of Fame 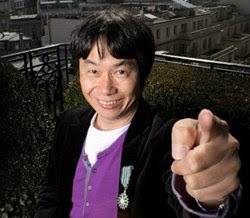 Often considered the "father of modern video games", Nintendo's Shigeru Miyamoto is widely credited with spurring the dramatic growth of video games in the mid 80's after the launch of the NES. The creator of such historic franchises as Mario, Donkey Kong, and The Legend of Zelda, Shigeru's impact on gaming is immeasurable to say the least.

To honour his lifetime work, The ELAN Awards will be inducting Mr. Miyamoto into the Video Game Hall of Fame on April 25, 2009. The selection of Shigeru was done by a panel of industry professionals, including three members of NextGen Player. The team here is very elated to see Shigeru receive this prestigious honour.

Stay tuned for more ELAN Awards news and announcements as we approach the Vancouver gaming award show in a mere two and a half weeks.
Award Industry Event Nintendo DS Wii