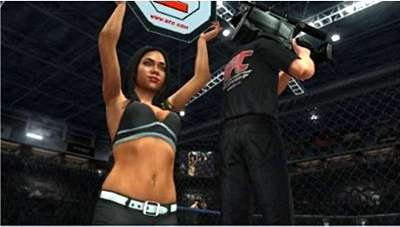 MMA and fighting game fans were in for a treat yesterday when the demo for UFC 2009: Undisputed was made available on the Playstation Network and Xbox Live Marketplace. The retail game, by Yukes and published by THQ, will see a North American release on May 19th, 2009. With some great UFC events behind us and the prospect of a few more exciting fight cards scheduled through out this summer, the timing of this game's release is impeccable.

I got a chance to tear into the Xbox 360 demo last night. Being a bit more than a casual fan of the MMA, and the UFC in particular, I couldn't help but share some impressions of what could be one of the most intricate fighting sports games of this generation. Hit the jump for the full demo impressions.

Chores and other personal responsibilities were easily cast aside yesterday as soon as I returned home from the office. I was eager to boot up the Xbox 360 and jump into the UFC 2009: Undisputed demo. "Jumping in" is not entirely accurate. The demo itself is really only a single exhibition mode and an extensive tutorial training mode whose depth stopped me dead in my tracks. The tutorial is optional but I knew better than to leap headfirst into the octagon without grabbing a clue first.

And it's a good thing I did: UFC 2009 has a massive command list of moves. The tutorial is broken up via menu screen into 5 major lessons, covering everything from basic movement and strikes, to submissions, transitions and clinching. There's even training segments on counters, reversals and what's known as "ground and pound" (GnP). It's all very impressive. Basically, almost any attack you'd expect to see a fighter pull off during your average UFC pay-per-view event, you'll see it in the game.

The meat of the demo is, of course, the exhibition mode. In a strange case of deja vu and reliving very recent history, the only playable fighters available are Chuck "Iceman" Liddell and Maricio "Shogun" Rua. MMA fans probably still have Rua's devastating KO win over Liddell fresh in their mind from last weekend and it's a nice touch to have the demo feel so current with recent events.

And now, the main event you've all been waiting for. How does this game play?

The short answer is: very well. As mentioned already, the command list is huge and is quite a bit more daunting than other fighting games due to the nature of MMA and how you need such smooth transitions between standing, striking, clinching, takedowns and ground grappling. Every single input on the Xbox 360 controller is put to use and it's no small feat that Yukes has been able to translate the vast repertoire of moves into a scheme that will at first feel very awkward but very quickly shines in its elegance.

With such a breadth of controls at my disposal (as well as a string of humiliating knockouts at the heavy hands of Chuck Liddell), I even ventured back to the tutorial for a refresher on attack clinching and working on my ground game. Imagine that, a tutorial that you can, and perhaps need to, replay! Although it skimps a bit in some areas, such as showing you how to break off or defend against the deadly Thai clinch, it's a great tutorial mode overall. I hope developers of more traditional fighting games take some notes and implement more helpful tutorials into their own work instead of throwing players into the deep end of the pool as they are so apt to do.

The exhibition matches I played using both Rua and Liddell were raucous, addictive affairs. Fights are intense and mirror the real televised events with jarring precision. The graphics are largely superb, with the most attention lavished on the fighters' appearance and the mimicry of the live broadcasts, from the TV graphics right on down to the play-by-play commentary of Mike Goldberg and Joe Rogan. Surprisingly, the game's rendition of announcer Bruce Buffer and the gorgeous "octagon girls" are a bit off but it's a small price to pay when everything else about the presentation is so confidently handled.

What's most striking about UFC 2009: Undisputed is how faithful it tries to stay to the source material. The focus is definitely one of a simulator as opposed to an "arcade" style of game, which means there is a real absence of gimmicks. Visual tricks like slow-motion zooms are kept to a minimum, which should please the purists who only care for the nuts & bolts of combat and turn their noses up at unnecessary frills.

At the same time, the presentation and overall feel of the game play can feel oddly sterile. Despite the awesomeness of the simulation, controlling the fighters can feel like a first lesson in puppeteering, something further emphasized by the often underwhelming feel of connecting with blows, even when it's a clean right hook to your opponent's ear. Wild, highly energized ground and pound battles in a real MMA fight look positively bored and clinical in the video game. And if there's one damning criticism I can level at the game so far, it's that it seems so much easier to be victorious through strikes as opposed to submitting your opponent. Submissions are very hard to pull off and even playing on the easiest difficulty I was not able to submit the AI once through half a dozen bouts.

I've heard reports that the submission game is more balanced in human-versus-human matches but I wasn't able to test it out the couch versus for myself. If that's the case, than I expect the Xbox Live portion of the final game to really take off and possibly overshadow the single-player mode. Granted, if they plan on offering a complete experience, Yukes would do well to fine-tune the single-player submission mechanics either before retail release or via a post-launch update.

My minor criticisms aside, the UFC 2009: Undisputed demo was mightily impressive and left me even more eager to get my hands on the full game next month. MMA fans have a lot to be happy about in May. A solid current-gen video game rendition of their favourite sport AND a few days later, a major UFC pay-per-view event. The fighting life is definitely good.