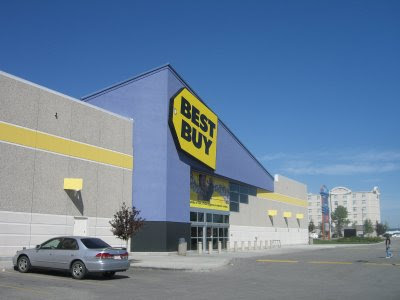 It looks like the used gaming market here in Canada is about to heat up even more as Best Buy Canada have announced on their website that they have launched a trade-in program at their 4 Edmonton stores.

The FAQ hints that future Best Buy stores will also roll-out this program by stating:

"We will continue to add trade-in gaming to other stores as we obtain licenses."

Best Buy joins Future Shop, EB Games, Blockbuster, Rogers Plus, and HMV who have all announced, or currently have a used gaming program here in Canada.

Much like the Future Shop trade-in program, used games traded in at Best Buy will earn you store credit for anything in the store -- not just limited to video games. The company will be accepting PS3, PSP, PS2, Xbox 360, NDS and DSi, and Wii titles for trade-in. It looks like you can trade in a maximum of three copies of the same game per day per person, which begs the question: why would anyone have more than three copies of the same game (aside from those shady scalper types)?

Unlike other trade-in programs, it looks like Best Buy has opted to post the trade-in values (TIVs) of quite a few recently released games, and the TIVs seem reasonably good. For example, you can trade in Fallout 3 for $40, Mario Party 8 for $30 and Motorstorm: Pacific Rift for $35.

It'll be interesting to see when/if this program expands into other cities and provinces across Canada. Stay tuned to NextGen Player for further updates as they roll in.