Confessions of a Trophy Whore: Admission #1 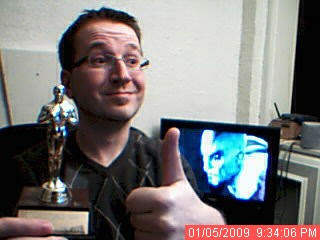 I have a problem.

Ah, but I digress. You see, about a year ago I finally made the leap and purchased an 80GB PS3. The motivation? Metal Gear Solid 4. I've been following the tale of Solid Snake every since the 1987 release of Metal Gear for the NES. Snake is like a brother to me, and I've been by his side for every battle, betrayal, and struggling breath. I simply could not live without experiencing his latest, and perhaps final mission.

That was June, and it was a great month. Soon though, it was time to move on. MGS4 was placed on my shelf as my very first completed PS3 game. Naturally, however, the gaming hunger grew inside of me. I needed more, I demanded more. So I started doing research, to find more suitable games for my new shiny black machine.

One game that stood out for me was Super Stardust HD, the downloadable PSN shooter that fans and critics alike seemed to be raving about. I grew up on classic shooters such as Space Invaders, R-Type, and Gradius, so this game certainly piqued my attention. Despite my interest, I got distracted by the more tantalizing retail games such Disgaea 3, Ninja Gaiden Sigma and Gran Tourismo 5: Prologue.

That all changed on July 2, 2008, when Sony officially released firmware update 2.40 which added great new features such as in-game XMB, text messaging to your PSN friends, and the much ballyhooed Trophies. That's the feature that did me in. Ironically enough, I never thought I'd really be all that into trophy collecting. I mean, they're just...pointless, aren't they? Silly little pick-me-ups with no intrinsic value, no real world application. But I love them. I really love them. I didn't initially, but Super Stardust HD changed everything.

Once I heard that SSHD was to be the first game to support trophies that pushed me over and soon my wallet opened wide. The game, of course, was amazing. Old school shooter with HD visuals, plenty of depth and gameplay that hardly tires. Within no time I received my first *ding!* and up popped my very first trophy - Hero of Lave (awarded for completing the first planet, Lave). It was okay, kind of cool, somewhat exciting, but I wasn't overly compelled to collect more. Alas, that quickly changed. After about a half dozen *dings!* I started to feel the bug. The gimme-more bug, the 'holy crap I need me some more' trophy bug. I decided to try and go for 100% completion.

Once I got to about the 70% mark I noticed something peculiar. Five trophies required game modes I didn't have in my menu display. I knew that add-on packs were available for SSHD, but did I really have to buy them to achieve 100% trophy completion? Unfortunately yes, and so I shelled out $5 for the Solo Add-on Pack. This pack added three new game modes - Endless, Survival, and Time Attack.

It also added an unparalleled level of frustration. The newly attainable trophies were much more challenging to acquire than the ones accessible with only the base game. For example, the Late Boomer trophy was nearly impossible to get, it took great ability, patience and intense perseverance. It took me several hours over the span of many gaming sessions, but I finally conquered that ridiculously complex challenge. Hearing that particular *ding!* was much more satisfying than the rest.

Well, in the span of 16 trophies, I was hooked. Collecting trophies was (at times) very satisfying and fun, they also extended the life of games which was an excellent side-effect. I was actually very close to shelling out an addition $5 for the Team Add-on Pack so I could collect the final trophy in the game (Split screen Co-op) - an easily acquired gold one at that.

Fortunately, right before I splurged my friend passed me a copy of Uncharted: Drake's Fortune. 48 new trophies to collect, many new challenges to test my mettle, all with no purchase required. The choice was obvious, so I dove right in. To this day, I've never looked back.
PS3 Trophy