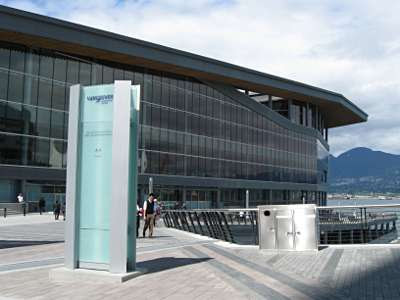 The inaugural GDC Canada came to a close yesterday afternoon. The 2-day event evolved from what was once known as the Vancouver International Game Summit. As a joint production between Think Services Game Group and Reboot Communications, the re-branding to GDC Canada can be viewed as a sign of Canada's growing prominence in the global games business as well as the rapidly ballooning influence of the conference itself. This year sees the GDC brand expanding into multiple markets, with an additional event for the US (Austin) as well as Europe and China.

In coordination with New Media BC, the first ever GDC Canada was featured as part of the Vancouver Digital Week, an overall initiative to promote digital media arts in the province.

GDC Canada is still very much the GDC we all know and love. Although smaller in scale than the flagship GDC conference held in San Francisco, the Vancouver-based counterpart similarly positions itself as a forum for game developers and business leaders to network, put on seminars and learn from one another.

So, what did we learn at the GDC this week?

GDC canuck-style kicked off with the keynote address, or rather conversation titled, "The Evolution of the Canadian Game Industry: A Conversation with Don Mattrick". The current Xbox and Games for Windows boss was joined by Victor Lucas (Electric Playground) as they discussed Mattrick's journey through the games industry and the state of Canadian video game development. There were very few surprises here as you might expect. Mattrick had some Microsoft cheerleading to do yet kept mum on a variety of product-related questions. Lucas even made a slight joke out it, beginning his talk with a slew of soft ball questions designed to flex Mattrick's talent at saying "No Comment".

While the "good stuff" will understandably be revealed at next month's E3, it was still interesting to listen to Mattrick recount his early days growing up in Vancouver as a nerdy gamer boy, running his own studio at the tender age of 19, joining the ranks of EA at the ground floor and finally moving all the way up to his current position as the Xbox head honcho. He's definitely one of those rare success stories and remains a bit of a poster boy for the local game development community.

The second keynote address was put on by the good doctors of BioWare, Ray Muzyka and Greg Zeschuk. Titled, "Emotionally Engaging Narrative: Gaming`s New Frontier", the doctors spoke about what they and BioWare do best, which is tell great stories in video games.

The keynote was slide and video intensive as they used the visual aids to show the evolution of storytelling in their own games, going all the way back to Baldur's Gate. They then moved through the years, showing off cinematic and dialogue reels from Jade Empire, Mass Effect and finally the upcoming Dragon Age: Origins (which looks absolutely amazing I might add).

For a talk about story it was surprisingly technical. Zeschuk and Muzyka explained how they adapted Richard Bartle's character archetype classifications for MMOs to their single-player games. The play and story interactions are categorized among four dimensions: Killers, for the action and combat-oriented moments; Achievers, which covers character progression and customization; Socializers, the story and character interactions; and Explorers, which is of course exploring the game world and the design elements that facilitate this exploration.

While explaining their current model of story design, the doctors liberally dropped hints at what to expect in their upcoming games. They talked about engaging players in an external narrative through the act of publishing player stats and achievements on the Dragon Age community web site and allowing players to actually change the game world in Star Wars: The Old Republic MMO.

The interweaving of internal (contained within the game) and external narratives is one of their ultimate goals, as well as seamlessly combining compelling stories with non-linear game worlds. With these kind of ambitions, it only made me more eager to see the results of their labour in something like Mass Effect 2.

As a whole, this was a jam-packed and very educational keynote. Dr. Muzyka and Dr. Zeschuk are great champions of video game storytelling and the session was not to be missed by both designers and writers working in games today.

In my next recap installment I'll talk about some of the other attractions at the conference, highlighting some of the developer lectures and the exhibits set up on the expo floor.

And we have photos. A bevy of images has been posted to the NextGen Player Flickr page, so I invite you all to take a peek.