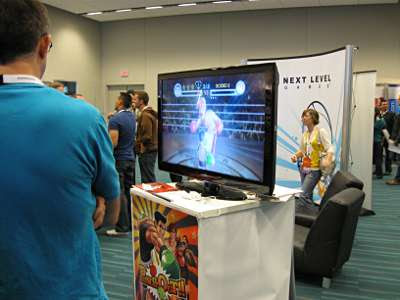 No industry conference is complete without an exposition area. The inaugural GDC Canada was did not buck this trend, gathering a variety of exhibitors together into a cozy room up front and center near the registration desk, yet mercifully out of the way of pedestrian traffic.

The expo floor acted as a home base during my visits to the conference. Predictably, it also turned out to be the hub of networking for the event. The morning coffee service held there might have had something to do with that, but there were a number of interesting exhibits spread through out the floor to keep attendees coming back for more.

From a consumer standpoint, there was nothing of real interest on the expo floor that could not be gleaned from a quick jaunt to Google. Radical had a booth showing off a Prototype trailer we've all seen. Likewise, Blue Castle was in attendance with the weeks-old Dead Rising 2 trailer playing on one of their TVs. The biggest crowd attraction was undoubtedly the playable copy of Punch-Out on the Wii. With the game still set for releaes on May 18th, it was the closest thing to a consumer trade show spectacle.

The real value in milling about the expo area was to participate in all the ripe networking opportunities. The business card swapping was fast and furious. And a job seeker would be a right fool to have shown up without a resumé in tow. It seemed like everyone was hiring, including the aforementioned Radical and Blue Castle as well as Next Level Games, the studio behind the new Punch-Out game.

Considering a career in video games? Three Vancouver-based schools vied for your attention at the expo: the Vancouver Institute of Media Arts, Vancouver Film School and the Great Northern Way Campus (Masters of Digital Media program.