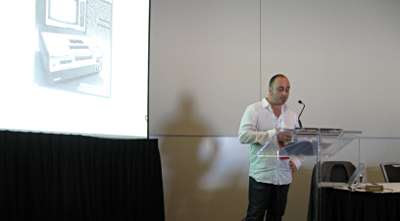 Hi readers! GDC Canada is a week old but I still see fit to finish up my coverage of the event. I've already covered the keynote addresses and the expo floor, plus our chat with Izora de Lillard. That leaves the real meat of the show, which were the plethora of workshops put on by industry pros, covering everything from art and sound to marketing and production.

With multiple workshops running each hour I made it a point to check out sessions hosted by a Canadian-based studio. I'll get into some more detail about the more interesting workshops I was able to attend.


An Army of Two Post-Mortem - Deconstructing the Mercenary, Reid Scheider (EA Montreal)
Reid Schneider served as the producer on last year's co-op shooter Army of Two and he spoke quite candidly about the many challenges facing his team during development. Among them were the inherent hurdles of working within a newly formed studio and trying to market the idea behind a new IP to the higher-ups as well as the team itself.

Schneider used a mantra adopted by, Gore Verbinski ("There is no 'they'") and used the famous director's work on Pirates of the Caribbean 3 as a jumping off point for his lecture. In essence, they had to stick to their vision of creating an extremely co-op focused shooter about private military corporations and they couldn't bow down to the wishes of the naysayers, or, the "they".

While the team managed to nail down most of their design objectives, such as implementing co-op moves into core play mechanics and integrating an MMO-style "aggro meter", Schneider admits to some aspects of the game that didn't go down as smoothly. During the Q&A, I asked him about how the jarring contrast between the leads and the serious tone of the backstory. As it turns out, the mixing of juvenile buddy-movie backslapping and themes about PMCs and terrorism weren't very well received in the European market and definitely raised a few eyebrows here in North America. It was clearly a clash of gameplay mechanics and narrative goals. Schneider assured the audience that the next game (Army of Two: The 40th Day) would be more consistent in tone.

Realism in Animation: Misnomer or Oxymoron? Owen Harley (Relic Entertainment)
How do you judge a virtual character or its animations to be realistic? How can animators' journey towards realism achieve exactly the opposite effect? Owen Harley, a senior animator at Relic, laid out an argument that convincingly rendered and animated characters are at least 10 to 15 years out despite the technological advances the industry has seen up to now.

He of course used Masahiro Mori's famous concept of the uncanny valley, along with a parade of recent examples in both gaming and cinema to illustrate the pitfalls of "going realistic". We were treated to clips of The Polar Express and the vacant stares of its digital cast, juxtaposed with Valve's keyframe-animated trailer for the Heavy of Team Fortress 2 fame. Shown also was the 2006 casting interview demo reel for Quantic Dream's upcoming PS3 adventure-thriller, Heavy Rain.

The purpose of these demonstrations was to challenge the audience to ask themselves what benchmarks were used to judge realism. Was it the ultra-detailed rotoscoping and texturing of Tom Hank's visage or the caricatured yet wonderfully expressive performance of the TF2 Heavy?

Harley presented a fascinating topic briskly and with humour, ultimately making a case for the survival of keyframe animation and its increasing integration with more "realistic" techniques.

Square Pegs, Round Holes: Integrating a Writer into your Studio
Marianne Krawczyk (Monkeyshines Entertainment), Susan O'Connor (Susan O'Connor Writing Studio), Pete Low (Hothead Games)
This workshop was a great primer for any budding games writer as well as developers of any other disciplines seeking ways to properly utilize the writers in their teams.

Although the speakers outlined many of the usual pitfalls of writing for games (brought in too late, kept away from the story, etc.), they also laid out many tips for success for writers and their teams as a whole.

In conclusion they emphasized that writing is design and not simply another asset to be bolted onto a project.

A shining example of how to do it right? Exhibit A: Ken Levine (BioShock)

Threewave Software has a lot of experience in this area, since the studio has established itself as developer exclusively dedicated to creating multiplayer modes for games. Morichere-Matte showcased their latest endeavour, the co-op multiplayer design for the multi platform Ghostbusters revival.

This workshop was very nuts and bolts, even getting into the finer technical considerations of hosting types, server farms and the importance of stress testing your maps to perfection before arting it up.

Building Strong Teams Around Gameplay, Ken Yeeloy (Next Level Games)
I've attended enough developer workshops now that my eyes begin to glaze over when I hear people start talking about the importance of communication and iterative design. So it's a credit to Yeeloy's speaking skills that I stayed engaged for most of his lecture. As a producer at Next Level Games, Yeeloy wasn't content to regurgitate broad concepts but instead got into detailed specifics on team building, management, accountability and even offering up nuggets on the nuances of office politics. Much of his lessons were drawn from his own work experiences, lending him a lot of credibility and respect from his audience.

Instead of being a drag, the workshop was motivating and clearly inspirational. At the close of the Q&A segment, Yeeloy gathered a flock of appreciative attendees. From an outsider's standpoint, he really painted an interesting picture of the producer's role as a crucial team member with many balls to juggle, yet does very little work on the actual game itself. They really are the glue that binds any large development team together. Protector and coach but also a father/mother figure, ambassador and when needed, a taskmaster.