An Interview with Bill Henderson, President of Offload Studios 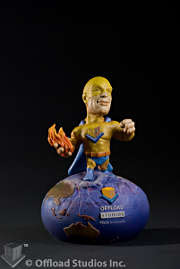 I crossed paths with the people at Offload Studios once at this year's ELANs press conference and again at the awards show in April. Founder Bill Henderson was kind enough to tell us more about the history of his young company and their unique product. While not of the video game variety, Offload takes their inspiration off the screen and creates tangible works of art you can touch or hold in your hand.

NGP: Offload Studios emerged in 2005 out of an institution you founded called DXLAB. Can you please tell us more about DXLAB and the inspiration that lead to the founding of Offload?

Bill Henderson: DXLAB was a consulting company that brought the Entertainment sector together with Education. We provided training for digital artists and worked with local studios in creating in-house training programs. Also during this time, we developed an online curriculum for high school aged game artists where we explored the application of 3D printing and digital art. We were amazed at how few companies existed to meet the needs of the professional artist and studio. In May of 2008, we purchased our first production equipment and launched Offload Studios as an answer to that demand.

NGP: DXLAB sounds like it was ahead of its time in the way it blended work, in-house training and education. What is the state of the online curriculum for high school students now? If I was a teenager today, I know I would jump at the chance to sign up for the programs.

BH: There are a few online courses available through LearnNowBC, but the student will have to be creative and look for courses that will lead towards Video Game development. The series we developed were shelved when we departed to focus on Offload Studios.

NGP: Your company specializes in fabricating physical sculptures from a digital source. It's very impressive technology: how does it all work?

BH: The core technology was derived by MIT in the late 80s. Fundamentally, the software takes the 3D virtual object and slices it into a stack of cross sections or layers. The hardware then prints each layer on top of each other much like a bubble-jet printer on paper except we use plaster instead of paper. This method allows for a color surface treatment in which the artist's painted texture is applied. This process takes around an hour per inch of height.

NGP: Can you tell us some more about the various tools used to create these digital outputs?

BH: No question, there is pretty cool technology that we work with, but by far, the most important asset in our production process is the people. We have both highly skilled digital and traditional artists working to produce the highest level of quality available.

NGP: I have this impression that a sculpture just rolls out of an oven-like machine. Is there any "hands-on" work done by a person or is the process largely automated by software/hardware?

BH: Our approach to production is that it takes an artist to work on art! The production process produces the raw sculpture and our artisans take it all the way by employing a variety of assembly and finishing techniques.

NGP: What else can you tell us about the various tools and techniques one of your artists might employ to add those finishing touches to a project? How tactile does it get for them: are we talking hands-on-sculpture process at some point?

BH: The magic starts with the clients file. We have a series of checks and scripts we run to identify areas that need attention (thin bits, floating sections, etc.). The digital artist makes slight modifications to the file to ensure that what is printed can actually be produced and handled. This is no simple task as strange things such as shipping have to be considered when analyzing the files. Fragile parts have to be made to be separated, for assembly at their final destination. The Laws of Nature are a major factor which places limitations on the final work, funny how things in the computer can be anywhere in 3D space, but in the real world, fall to the ground!

Once the ‘printer’ has produced the figurine, our post-production team takes over. And again their task is as unique as the piece they are working on. Fit and assembly for some pieces, custom surface treatments for others. It is a beautiful thing to watch an artist bring another artist’s work to life! The care and attention to detail is amazing!

I have included a couple of photos of a print that failed half way through completion. You can see the colour is applied to the outer 1 mm.

NGP: This method of sculpture manufacturing seemed to really gain traction last year, when coverage spread of another company that used "rapid prototyping machines" to create high quality models of World of Warcraft avatars. What are the differences in Offload's core technologies and the techniques that you employ when tackling your own projects?

BH: The WoW avatars are produced using the same core production equipment as ours. We initially positioned ourselves to work with professional artists and studios, typically on one-off pieces. In doing so, we've established the highest standard available in this medium while at the same time establishing a portfolio of creative solutions for the digital art community. For example, our greatest strength is the emphasis on communication with the artist and building lasting relationships based on mutual respect for their art.

NGP: You have a range of clients, from artists to corporations, and you have made inroads into the world of video gaming. How has Offloads area of expertise linked up with gaming in the past? What are some of your plans for the near future?

BH: We've made inroads by establishing grassroots with the artists and their art directors. We plan to continue expanding our expertise and client base. Further in 2009, we'll see the release of high profile, Offload Studios brand intellectual properties.

NGP: Well it looks like you’ve already got a fan in Greg Juby of Electronic Arts. Offload Studios worked on some Facebreaker figurines last year. What were these figurines used for? What doors opened up for you after this collaboration with the games software giant?

BH: These figures were completed as reward Trophies for the dev team that worked on Facebreaker. We have worked with several different EA titles, but this year has not been the year to be working on innovative components for video games. Most of the teams we did initial work with had their projects cancelled as a result of the economic situation of late ’08.

NGP: So imagine you’re speaking to a room full of console and PC gamers. What kind of details can you provide to them about video game-related products and initiatives that Offload will launch in the next 6 – 12 months?

BH: Sadly, we have to get the economy rev’d up again! One title we are still working with has had its ship date extended a year. Many of the initiatives that are in the pipeline may stay there for a bit longer. But certainly, look for the ability to customize and buy your own avatar in many games over the next few years.

NGP:At the ELAN Awards, you showed me what looked to be a custom-painted model in the shape of a large egg. Can you tell us more about what this egg represents to the general consumer?

BH: A perfect example of an Offload in-house development! The concept mirrors that of user avatar creation seen in video games today. Essentially, the user will be provided with an interface to design and texture an egg shaped character which would be uniquely produced as a custom figurine. The advent of user created, custom merchandise has begun!

NGP: Tell us more! You’ve gotten everyone here at NextGen Player curious about this. What’s the barrier to entry for people who want a custom egg but who aren’t the most artistically inclined?

BH: For those without artistic talent, they will still be able to pull together a creation from stock imagery (eyes, ears, mouths, etc). Compare the Egg Project to creating your own Mii. But for those with art talent, there will be a 3D designing/painting interface for complete customization of surface detail, and the ability to accessorize the creation with 3D objects, such as headphones, hair, capes, etc.

NGP: So I’m totally new to the Offload experience. What would be the steps I’d take to create my own custom-design egg character?

BH: Full details available once the site is launched this summer!

NGP: Are any more shapes/styles in the works for people who don’t fancy eggs?

BH: You bet! The egg is just a simple organic shape to prove the concept. The options will be endless! Hearts, dolphins, horses, people… Wait until we combine the 3D Online Modeling course we created with an online 3D modeling interface!

NGP: I attended the recent ELAN Awards in Vancouver and the Offload Studio-crafted statuette was a prominent sight. How was it you became involved with this high profile video gaming event?

BH: The power of word of mouth! A client of ours in Los Angeles recommended us to the artist who designed the sculpture (Chris Nichols from SpinPro). Chris put our name forward to his boss, Doug Campbell, who sits on the board of directors for the ELANs. We were commissioned to create the physical prototype of the new award – the results convinced the ELANs that we were top choice for the production of these custom trophies.

NGP: What was the inspiration behind the design of The ELAN statuette?

BH: Holly Carinci, a co-founder of the ELANs and inspiration behind the award, explains the name ELAN comes from ELectronic and Animated. EL is the god of video games, AN the goddess of Animation and VFX.

The original trophy concept had Canada connecting to the world and now the characters are standing on top of the world indicative of the positive direction the award show is going. The screen represents all digital arts and the figures are looking upwards into the future.

NGP: Thanks for having this chat with us, Bill. How game savvy is the staff at Offload? Are you a gamer? If so, what are the games keeping you up late at night?

BH: My first video game I got to spend rolls of quarters on was Pong. Yes, I was an early addict in 1975. Later, Robot Odyssey and Prince of Persia (version 1!) filled my time. There were the mods/hacks of games like Duke Nukem and Half-Life, that we built in the 90s that made game playing a truly personal experience! Sony sent us some console gear, so the team at Offload rocks out occasionally with Rock Band, or relieves stress with a good fling of Jarvis in PAIN PS3.

The under 30 members of the team enjoy finger blisters with titles such as Far Cry 2, Assassin’s Creed, Metal Gear Solid 4 and Age of Booty.

By far the most exciting games to play are those that are still months from shipping. As we prepare tactual assets for games, understanding the game and player experience helps in the development of ultra cool solutions.
Interview NextGen Player Interview