Interview with Patrick Fortier about WET and Bethesda 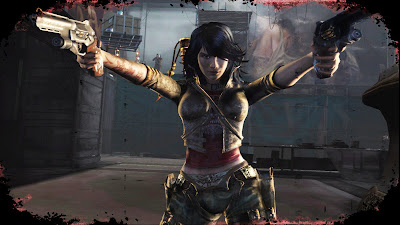 By now, everyone in the gaming world should be aware that Montreal based A2M finally found a publisher for their much anticipated game WET. In case you are one of the few that are unaware, that publisher is Bethesda Softworks. You know...those guys who brought you Oblivion and Fallout 3.

NextGen Player had the opportunity to ask a few questions to Patrick Fortier, Creative Director for WET about the recent alliance with Bethesda as well as more details about the game itself.

NGP: The recent announcement confirming Bethesda Softworks as the publisher for WET was welcome news for many gamers. What are the key factors A2M considered in deciding to partner with Bethesda?

Patrick Fortier: After the merger between Vivendi and Activision, A2M really didn’t want Wet to get lost in the shuffle, so they decided to buy the game back themselves. The goal there was to have time to look for the “right” publisher, meaning someone who understood what we were trying to do with the WET, appreciated its “retro 70’s action movie meets spaghetti western” vibe and was in a position to dedicate the time and attention we felt it deserved. Bethesda met all those criteria and more!

NGP: Bethesda is definitely a well recognized company in the gaming industry. How does A2M feel about the opportunity to work with Bethesda?

PF: It’s been wonderful working with Bethesda. Since they also make games internally and have already experienced everything first-hand, it makes it very easy to communicate with them. They’ve provided the perfect environment for us to concentrate on finishing the game and their energy and professionalism have proved a big source of motivation for the team.

NGP: Bethesda is primarily known for their RPGs and so it would seem a game such as WET is a bit a departure for them. Do you feel any pressure to deliver a game that can get people to look at Bethesda in a different light? Inversely, do you think Bethesda's reputation will affect gamers' perception of WET?

PF: I think Bethesda is a name that resonates with quality and right away that sheds a positive light on WET because they clearly wouldn’t have picked it up if they didn’t believe in it. In regards to their “RPG” reputation, I think Wet is a great vehicle for them to showcase how they are expanding as a publisher and are willing to go outside their current comfort zone. I think WET is one of the projects that can really help people associate Bethesda to publishing and not only to internal development.

NGP: How much input or influence will Bethesda have in the final output of the game?

PF: Actually, a big reason why Bethesda was attracted to WET in the first place is because the style and gameplay pillars were already so well established, so there are no plans for any significant changes. It is great to have them on board during this final polish phase however since they have a lot of experience and have a fresh eye on the game. Obviously though, their biggest impact is really in the marketing of the title and bringing it to shelves in a successful manner.

NGP: Control mechanics can make or break a game. How has A2M approached this for WET?

PF: As we are taking a unique approach to 3rd person shooting with the acrobatic nature of our gameplay, we spent a lot of our time figuring out the controls and going through different iterations. Many different things were tried regarding dual targeting, camera control, slow motion or no slow motion, etc, until we found just the right mix of “easy to play, hard to master”. Right now players can have a blast when they pick up the controller for the first time, but they can also develop their skill and pull off head-shots and crazy chains of acrobatics once they really master the controls.

NGP: At this point in time, how much of the game is completed? Are there any recent or upcoming new developments for the game?

PF: We are currently putting the final touches to the game as we are quickly headed towards release. Most of our time is spent playing through all the levels, balancing different values and debugging the game!

NGP: Confirmation on a release date?
PF: WET is set to release in Fall 2009