Microsoft Looks To Provide Saget-Free 1 vs. 100 Game This Spring 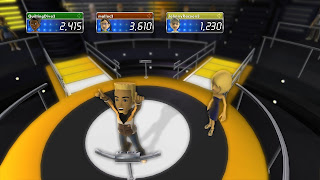 On a sunny Tuesday morning in downtown Toronto, Microsoft offered a first look to select members of the media at their upcoming Xbox Live release, 1 vs. 100. The game is an adaptation of the popular television program, but in place of sweaty Americans trying not to pass out next to Danny Tanner, we now have the fine people of the Xbox Live community testing their knowledge of questionably-useful facts. I won't lie, the competition was heated at times. There may have been some smack talk, but someone dared to question my knowledge of ABBA lyrics and well...you know that just wouldn't stand.

And there you have it. The exact moment in this article where I reveal something I probably shouldn't have. More horrifying admissions and hey, maybe something about the actual game after the jump?

1 vs. 100 has been touted as a "massively multiplayer game show", and from what I saw of it on Tuesday this claim might actually end up being valid in practice. On a dozen televisions, teams of 4 answered a variety of questions which included a few Canadian-related facts. So while you'll see questions about popular movies or musicians, you might also be asked what historical weapon represents the Queen in Canadian Parliament. (Psst, it's a mace, thanks grade 10 history class!)

The game is going to run live on Friday and Saturday nights and is open to all Xbox Live Gold members. It's an interesting approach, one that asks people to schedule a specific time for gaming and I'm curious to see what kind of numbers Microsoft ends up getting for this. You'll be able to play the game in an off-hours mode at other times, but the main draw for this game is going to be the live events which will play out over a 13 week "season".

The actual game had to bring something other than just a trivia experience with a popular license, and Microsoft looks to have done that by placing the emphasis on having a social experience, either with your friends in the room with you or over Live. You are constantly offered the opportunity to see how you're stacking up against your friends and other players. Additionally, you're competing for more than just bragging rights, as prizes will be available to win. Typically you're looking at something like MS points or an arcade game. Still, better than a kick in the nether-regions.

As for the gameplay, it's a pretty standard set up. You start the game as either the One or as part of the Mob and you lock in your answers using the X, B and A buttons, with more points being rewarded for speedy answers. One nice touch was allowing players who have been eliminated from the round to continue to answer questions and build their overall point totals rather than sitting around waiting for the next round to start. 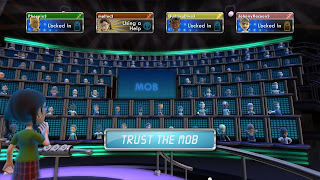 Ultimately, 1 vs. 100 looks to try something new, both in terms of allowing a huge amount of people to compete at one time, and the business model of offering the game up to Gold Members for free. One of the oft-heard complaints heard about Live is that there aren't enough compelling features to justify the cost of membership and Microsoft seems intent on changing this perception with ventures like 1 vs. 100. Why not check it out for yourself when the Canadian beta goes live on May 9th, 2009?
MMO Xbox 360 Xbox Live