Why is Wipeout HD so Ego Shatteringly Hard? 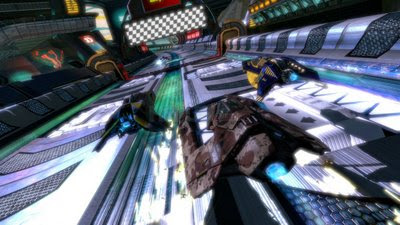 If there's one thing that I'm proud of when it comes to video games, it's that given some time, I can generally become quite proficient at the software I play. Take for example the zombie survival game Resident Evil 5. Out of the box, the game came equipped with 51 trophies - 38 bronze, 11 silver, 1 gold and 1 platinum.

As you would expect, most of the bronze trophies are achievable over the course of a single play-through. You've got your standard trophy for beating each chapter, trophy for getting a specified number of kills with a particular weapon, and fun off beat trophies such as Egg Hunt which is awarded for discovering four different types of eggs. Simple fair, and easy enough to collect.

Now striving for the silver and gold trophies does add an additional level of complexity; however, most of these trophies are exploration-based (e.g. Badge of Honor awarded for finding all BSAA emblems), or grinding-based (e.g. Take it to the Max awarded for upgrading all weapons). In order to acquire these trophies really all you need is a lot of determination, time, and perhaps occasionally some serendipity.

Overall, I found the only intensely challenging trophy to obtain was the one gold trophy - War Hero - awarded for completing the game on Professional difficulty. Admittedly, that was a pain in the butt to get, although by that point you probably have at least some weapons with infinite ammo making the game tough, but not impossible.

Now Wipeout HD is another beast altogether. I've been playing the PSN downloadable game off-and-on since it released in September 2008. To my embarrassment, I've only managed to achieve 29% trophy completion. Of course that begs the question - do I just flat out suck at the game? Honestly, I don't think I do! The game, at it's core, is just so ludicrously hard, it's boarderline punishing. To date, I have 21 out of 38 trophies.

You should see me race against the computer AI on Elite difficulty - it's an utter farce. Every race you begin in last place, and more often than not, I stay in that position lap-after-lap-after...well you get the idea. Really, I'm not sure what SCE Studio Liverpool was thinking when they tested the three difficulty settings in the game. Perhaps it's bittersweet irony that whenever I drop down a difficulty setting, to Skilled, I can race into 1st place within seconds and maintain this position with relative ease.

Let's just be blunt here. The trophies for this game were designed for two types of people:

(i) Insanely dexterous racers that defy all normal human limitations; and

There's really no other way to put it. If you don't believe me, take a look at this video of a gamer achieving the Zone Zeus trophy. It's out of this world. Supersonic speed is so blisteringly fast it makes my eyes water just watching a grainy YouTube video.

I just don't get it. I thought I was pretty good at video games but Wipeout HD makes me believe that there is this whole class of super human gamers out there able to achieve trophies my hands and thumbs could only dream of. That my friends, is a little ego shattering if you ask me.

Damn you Zico for your 30.82 second Speed Lap on Anulpha Pass. Damn you to an anti-gravity hell!
PSN Racing Trophy