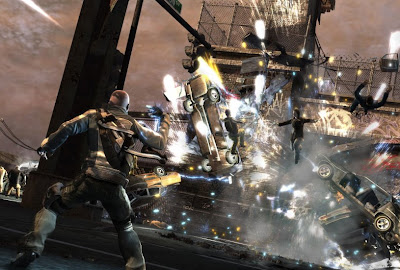 Whenever it comes to open sandbox games, there are typically two experiences. One is rich with massive environments, high level of interactivity, fantastic gameplay and great content. On the flip side is just the opposite of the aforementioned type, which without having to explain in any detail, results in a shallow and forgettable experience.

So how does inFAMOUS fare? Without a doubt, inFAMOUS is a very good game and it delivers well in many aspects from graphics to overall gameplay. inFAMOUS has you take on the lead character Cole and his inheritance of superpowers that makes him a fearsome weapon of electrical fury . This all comes about due to a massive explosion that levels all of Empire City and in effect renders its citizens helpless. This chaotic event also spawns a gathering and formation of various gangs that take advantage of the situation to seize control of the entire city. As you progress through the game, the direction of the story and game will depend on moral choices you make frequently throughout.

In fact, right from the beginning you are presented with a first situational moral choice where you have the option to execute either a good or evil act. There are quite a few of these instances in the game and it definitely brings about a lot of variety. Depending on your choice, you will be awarded with either good or evil Karma. This is a great aspect to the game because you can go through the game clean or to mix it up and throw in some negative actions. It also provides good replay value as you can decide to go through the game again but in an opposite direction. Another nice touch is that the distraught citizens of Empire City will react accordingly to your Karma level. Act like a choir boy and they’re on your side. Do the opposite and you’ll get no sympathy and likely some aggression. Ahh, but when you possess the ability to project destructive electricity from your body, does it really matter?

Other instances that affect your Karma level are all of the main and side missions. There are plenty of them scattered around all three districts of Empire City. The main missions obviously take you through the game as you complete key objectives. The side missions offer up a variety of activities with two main outcomes. One is to affect your Karma level (for good or for worse) and the other is to gain back control of territories within the city’s districts. Fortunately the side missions are actually fun to play, enough so that you’ll likely put in the effort to complete all of them so you can gain complete control of all territories. I got much enjoyment out of the satellite uplinks (get from point A to B within the allotted time and hit all the checkpoints in between) and the prisoner escort missions.

The gameplay mechanics in this game are crisp. The control scheme is simple and quick to pick up. As you build up your skill set and abilities, you’ll find that eventually you will utilize pretty much all of the buttons on the controller. Even then the way the layout has been set up it doesn’t affect the gameplay and in fact provides a seamless and almost mindless effort to execute all of the various moves and combos available. Speaking of moves and abilities, even with your superpowers you start off with some basic skills and as you progress through the game, you will learn new abilities to use to your advantage. There are a finite set of abilities you can gain and additionally you can level up these abilities as you gain XP points. Unlocking all abilities and maxing out their levels will not only acquire you a Trophy, but will arm you with a complete and for a lack of a better term, kick ass arsenal of superpower moves at your disposal. My absolute favourite ability is the using the shockwave to launch enemies into the air and then pick them off with a lightning bolt – it’s very reminiscent of skeet shooting. Good fun. The game also has a cover mechanic. I found it useful only in a few instances and at many times had some difficulty to get it to work when I needed it most. It seemed inconsistent as to when and where you could effectively utilize it.

Another shining attribute of this game is the interactivity with your environment. Being that Cole possesses superpowers, he can scale buildings and other objects, leap from and between buildings, glide on power lines and rails, destroy various objects such as cars and sidewalk benches, watch TV, protect or attack people on the streets and drain electricity from power sources to replenish his power gauge. You also have the ability to interact with injured citizens and enemies with the choice of three options. Either bio leech them (basically you suck the life out of them – literally), restrain them or you can revive them (citizens only) by using your two hands as a defibrillator and jolt electricity through their body. Much of the way in which the interactivity was executed reminds me of games like Assassin’s Creed and Crackdown. A couple of great games in their own right.

Other production values in the game from graphics to sound get high marks. Visually, the game is very detailed. Character animations look smooth and natural. Cole’s character movements specifically bring about a combination of stylized and yet rugged nature that fits just right. In addition, many of Cole’s moves are as fun to watch as they are to execute. The voice acting is very good as well. All of the key characters in the game sound believable and certainly establish a sense of personality for who they are. Zeke, Cole’s best friend and sidekick is entertaining to listen to and he’s been fitted with some humourous one liners for added substance. The sound effects and music work well to bring about the atmosphere. You really get a sense for this in some of the game’s intense battles. I recommend the use of a surround sound system here to get the full benefits. There’s nothing like hearing cries and explosions coming at you from all directions as you maintain to fight off waves of enemies coming at you. Another nice and effective touch was the use of freeze motion animated sequences that were rendered in comic book style artwork to help progress and reveal more of the game’s plot.

Amongst all these great attributes there was just something about the game that I felt was lacking in some small way. It wasn’t until I finished the game that I came to the realization at how quickly and easily I was able to complete the game. I suppose this speaks volume of the fact I had enjoyed all aspects and features of the game so much that I overlooked this.

This small detail aside, inFAMOUS brings much of the goods to the table. If you want a game that has variety, is well produced and is addictively fun to play, then I fully recommend this game. The team at Sucker Punch did a great job in ensuring inFAMOUS would be a gaming experience unlike any other on the PS3 system.

Pros:
- Massive and highly interactive environments
- Flashy and fun arsenal of moves to execute
- Lots and lots and lots of fun to play

Cons:
- Not as challenging in difficulty
- Game can be finished in a fairly short amount of time

NextGen Player give inFAMOUS a...