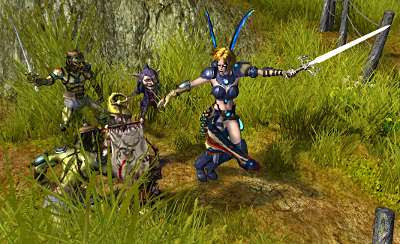 The peaceful kingdom of Ancaria is under threat. The mysterious T-Energy has spread through out the land. It gives life but also destroys it, seeping into the soil and warping all that it touches into a grotesque mockery of nature. Ancaria is now slipping into dark times. Its people call out for a hero to save them from the menace of T-Energy.

Six brave warriors have answered the call. They ride as one, scouring the countryside, slaying monstrosities, defending those in need and upholding the justice of the land. Unified by a common bond, strengthened through battle and forged in steel, our saviours will stop at nothing to --

And that, folks, is probably how I could leave my review of Sacred 2. It's a shameless loot-fest, loot-grind of the highest order. You will pick a character based on one of six available class types. You will improve this character through countless battles. You will level your stats. You will make agonizing skill point decisions. You will find much loot. You will improve your character's killing efficiency with said loot. And depending on your moral stance towards the Diablo series of games, you will gleefully repeat this cycle for approximately 20 to 50 hours.

Pray tell, did I mention anything about the PHAT LOOTZ?

If you're not convinced that this is an informative enough review, then please read on!

If my review introduction felt a little glib, it's because I am myself a huge fan of action-RPG dungeon crawlers despite my opinion of them as textbook examples of lowest common denominator design. From my early days with SSI's Eye of the Beholder through to the genre's golden age in the late 90s and early 00s with Blizzard's Diablo games, I've been in love with grinding loot and leveling characters. But now we're in 2009 and the tried and true formula is (finally) beginning to get old.

The original Sacred came out for PC in 2003. Developed out of Germany by a small outfit called Ascaron, it came out of nowhere really, arriving onto the scene when the Diablo II clones were finally beginning to taper off. While it didn't do anything that came close to revolutionizing the genre, Sacred immediately grew a loyal fan base with a number of technical refinements.

Chief among these refinements was the inclusion of a massive open world environment completely open to the player from the very first level. Diablo never nailed this down, instead choosing to railroad you through a linear string of chapters and building their worlds around a central hub and randomly generated dungeons. The first Sacred progressed through main chapters too while still offering up an immense world to freely explore and hundreds of optional side quests to embark on at your leisure.

Sacred also introduced the concept of mounts which were used not only as a means of transportation but also for battle. The ready availability of mounts made getting around even easier. Supplement this feature with a fairly intuitive interface, a unique take on skill systems, unorthodox player classes (a vampire anyone?) and of course, endless piles of treasure, and you can begin to see how Sacred attracted its devoted fan base.

The reason why I went into so much detail with the first game is because we are a good six years past its initial release and the sequel, Sacred 2: Fallen Angel, is essentially the same game albeit with a new coat of paint. It takes concepts that seemed progressive back in 2003 and, for fear of screwing up a good thing, merely repeats them with very little refinement. The mounts are back, the angel-like Seraphim is back, the same skill system is back and the amazingly convenient "travelling equipment chest" is back, too.

The Xbox 360 version sees some console-specific improvements that are worth noting. For one, the interface has been retooled quite thoughtfully to accommodate the gamepad, allowing players to map the bulk of their special abilities to the face buttons. By pulling the left and right triggers players can access additional sets of face button mappings, totalling 12 abilities that can be accessed directly through trigger and face button interactions.

Inventory and character management is a big deal in RPGs and here Sacred 2 also does not disappoint. Item categories and character stats are separated within a radial menu and each section is sub divided into a series of pages and lists. The breadth of the menus and pages can be intimidating at first but becomes a breeze to navigate after a couple hours of play. A clever paper doll system satisfies our loot whoring vanity by way of a camera that simply zooms in closer to the player's avatar when it's time to play dress-up.

The improvements that Sacred 2 brings to action-RPG interface design should serve as an example to all other developers competing in this genre, Blizzard included. Where the game doesn't fare as well has more to do with its heart and soul than anything else. More specifically, the world of Sacred is painfully lifeless. Ancaria rivals Oblivion's Cyrodiil as one of the most generic fantasy settings in all of gamedom. The world may be hand-crafted and impressively rendered, with dozens of cities to visit teeming with NPCs but any city may as well be reduced to a cluster of icons representing merchants, rune traders and teleportation gates. As for the citizens of Ancaria, they may as well be interactive signposts, doling out banal errands and occasionally offering up some interesting side banter.

And the quests. Just like they did with the first game, Ascaron operates under the philosophy that more is better. There are quests everywhere. En route to a quest objective you are likely to pick up three or four more other quests plus the six fetch quests you'll take on the journey back to the original quest giver. It's a minor miracle that you're not pulled aside by a peasant homemaker to please pick up a litre of skim milk while you're traipsing around the countryside slaying your 1000th kobold. (Actually you will be tasked with the fantasy world equivalent of the milk run many times over, so not to worry.)

Before long your quest log will be clogged with jobs to complete and they'll all begin to blend into each other. "Questing" devolves into a cycle of following the highlighted map marker. The why's and the what's cease to matter; just hand over the gold and the experience points and be done with it.

There are also a litany of bugs and polish issues that have leaked over from the first game. Laggy control inputs make combat feel unresponsive at times and frustrating when you're trying to quickly hack through a mob. Your onscreen character can get hitched on scenery, forcing you to reload or warp to a previously activated teleportation gate. The "Compare" button found in the shop and inventory interfaces is also broken, depriving players of what was intended to be a very useful loot analysis tool.

The co-op mode offers a reprieve from the drab single-player campaign but additional niggles like poor matchmaking, rough net code and corrupted save files threaten to ruin that experience as well. When it does run smoothly, the co-op can be a lot of fun even though the rhythm of play isn't the most conducive to a group dynamic. Play with friends for sure, so there's clear communication and less chance of tempers boiling over when half the party is struggling to defeat an army of orcs while the other half are still in the last town sorting through their inventory. And of course, what little world-building and plot development there is recedes even further into the background when co-op play is engaged. If you haven't stopped reading the "flavour" text whilst playing solo, joining a co-op game will sure break you of the habit.

To its credit, Sacred 2 doesn't quite sink under the weight of its myriad shortcomings and stays afloat by executing its core mechanics as competently as it does. Collecting loot, earning experience points and tailoring specific skills to construct a unstoppable death-dealing machine are all still very alluring, addictive activities. Despite their lazyness as storytellers, Ascaron is definitely not the studio to screw up such a simple formula: the Diablo-clone, the action-RPG, the hack n' slash... whatever you choose to call it.

Sacred 2: Fallen Angel is actually a very insidious game. It's a grand work of simple-minded design that reviewers can criticize until they're blue in the face. Yet try as I may, I haven't been able to reconcile my criticisms with the nearly 50 hours I've invested into the game already. And that, my bleary-eyed friends, is the true magic of Sacred.

Cons:
- Most of the quests are tedious assassination jobs or fetch errands
- Buggy match matching
- Muddled story and lousy world-building: if you don't care about loot or XP, you just won't care at all
- Spectre of corrupted save game files may be enough to turn players off entirely