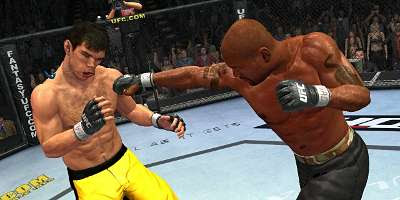 Get your hands up and tuck in that chin, because it's time to enter the octagon and make your mark as the ultimate cage fighter. UFC 2009 Undisputed has been on store shelves for a few weeks now and this review is for you. You, the casual gamer who wants to blow off some steam by knocking heads but who also isn't familiar with the sport of MMA. You, the dyed-in-the-wool Street Fighter master who's never given much thought to the UFC or any kind of sports fighting simulation. And you, the hardcore UFC fan who, for whatever reason, has not pulled the trigger on what I'd like to think of as the real debut of MMA simulation in video games.

Well son, it's time to get off your duff and trade some punches with me: UFC 2009 Undisputedd is the real deal in sport fight sims.

Ultimate Fighting Championship (UFC) is the biggest, most successful mixed martial arts promotion today. Under the care of its charismatic, sometimes abrasive president, Dana White and the Zuffa corporation, the UFC has evolved from an obscure pay-per-view freakshow carnival act into a burgeoning mainstream phenomenon.

Like its real-life inspiration, the UFC video games have experienced a bit of a rocky history. The first UFC branded game was released way back in 2000 on the Playstation and Dreamcast, with four successive iterations over the years. By all accounts, these initial five UFC games were miserable, hobbled by poor controls, poor feedback and shallow career modes.

It's no surprise then that with the rise of UFC's mainstream popularity, we see them partnering with THQ and Japanese developer, Yuke's, to rebirth the troubled MMA series and set a new bar for sports fighting games. Yuke's is steeped in fighting game experience and are best known for their work on WWE Smackdown!. With a pedigree like that, does this new UFC game deliver on all counts?

First, we need to cover the bullet points. UFC 2009 Undisputed is a very feature-rich title. A wealth of single-player options are available to you, including Career Mode, Exhibition matches, Tutorial/Practice mode and the intriguing Classic Fights. Career and Exhibition should explain themselves, with the added wrinkle of a Create-a-Fighter feature (CAF) which allows you to build your own cage warrior from the ground up, establishing physical traits, fighting styles, skill attributes and even the number of logos appearing on their custom trunks.

Plan to spend a lot of time in the game's comprehensive Tutorial mode. So detailed is this tutorial that I've heard players spending upwards of 30 minutes going through each individual lesson. It really is a crash course to the world of MMA and is essential for both fans and neophytes to the sport. Of course if you're impatient you can take your lumps and jump into any of the other modes, as well as online play and just learn as you go. But take heed, it will be a rather sharp learning curve. The Classic Fights are particularly interesting as they allow you to re-enact notable fights through out UFC's history. These matches require you to finish the fights as they happened in real-life in order to be successful and are bookended with background commentary and archival footage of the event. It's a great bit of fan service and serves a dual purpose in educating newcomers on the various fighters, rivalries and their milestone victories and losses.

Mechanically, UFC 2009 combines the thumbstick twiddling of EA's Fight Night Round 3, the button mashy-ness of a typical pro wrestling game and the quick reflexes and tactical considerations of a 2D fighting game. Picking up the game for the first time is bound to intimidate some players. As someone who has followed mixed martial arts for a few years, I was stumped as to how anyone could translate the subtley of grappling, submission holds and counter strikes to a pick up & play video game. Consider me un-stumped. Yuke's has done a remarkable job of translating nearly every facet of the sport into a fun and rewarding video game experience. The vast commands list and control scheme is intially stupefying and will require an investment of time to learn, however, the Yuke's team has to be commended for mapping these controls as logically as possible. No button is wasted, the button layout makes sense and I'm hard pressed to imagine an alternate set of controls that could do a better job of putting the MMA experience into gamers' hands.

The experience is furthered by the game's excellent visuals. Over 80 real life fighters are represented across the UFC's five weight classes and they are all rendered to perfection, with few exceptions. The audio is more of a mixed bag. In-game menus are overlaid with a playlist of licensed, overbearing hard rock/rap tunes and repetitive loops of "hip-hop muzak". On the flip side, the in-fight commentary by Mike Goldberg and Joe Rogan is great and just varied enough to feel realistic.

I think UFC 2009 Undisputed really benefits from its self-serious tone and leanings towards simulation versus arcade action. This approach, however, does not do any favours for the career mode, which is dry, procedural and a little bit unforgiving too. The career mode sees you grooming your custom-made warrior from his early days as a rookie to a division champion to eventual hall of famer. Players step into multiple shoes as fighter, coach and manager. The action between fights is largely menu-driven, centered around a calendar that allows you one action each week, whether it be training at the gym, sparring with a training camp partner, attending a special training camp or doing any number of PR-related gigs like photos shoots and autograph signings. These ancillary tasks reward you with experience points to sink into your fighter's stats and skills, RPG-style and also earn you cred points that can be used towards upgrading equipment at your gym.

This may sound very intricate and cool to play, but really it is a lot of busy work that grinds down the career mode to an interminably slow pace. Options to automate skill point distribution or sparring would sped things up a lot and allow you to play through multiple careers much faster. It's a strange mode since you'd expect it to introduce you gently into the play mechanics yet it can be horribly unbalanced. It's perfectly easy to train yourself into a corner if you don't know how to distribute your points (with no option to respec) and while the lower or middle ranked fights are not too much trouble, the difficulty ramps up considerably once you start to crack the top ten bracket. You'll square off against fighters with much higher stats and much more aggressive AI. The challenge is nice, but eventually you feel like the deck is stacked against you, sending you back in defeat to waste more hours grinding away at the gym and feasting on fighters you've already beat two, three or four times already. It hearkens back to the worst in RPG design and definitely needs a rethink for the inevitable sequel.

The action inside the octagon is better but not all that it could be. Every fighter shares the same stock body movements, depending on their fight disciplines. Kickboxers move and attack exactly the same, as do Brazilian jiu-jitsu artists and so on. Footwork can be summed up in one word, and that is: slow. Every fighter, regardless of their size or style, controls a bit like a truck, with the ability to sprint giving you an inkling that these guys can actually be pretty nimble on their feet. The game play as a whole does have a sluggish feel to it and misses out on the "snap" of a faster 2D fighting game. Given the complexity of the controls and the various stages of combat, standing up, in the clinch or on the ground this is still acceptable as it allows transitions and counters to be conveyed in time for players to react accordingly.

There's also an organic, random element to the game that reflects the unpredictable nature of real MMA. Flash KOs -- unexpected knockout wins -- are not uncommon and can prove to be a pleasant surprise or a real pain in the ass depending on who's on the receiving end. The same applies for submission wins, which seems to be depend more on stamina levels and behind-the-scene die rolls than the furious twiddling of the right thumbstick. It's here where the wrestling game roots of Yuke's show through and it sort of sullies the technical, precise nature of the fighting system they're working so hard to have you buy into.

It's a tricky balancing act, one that Yuke's still manages to nail. With the addition of things like cage tactics, southpaw stances, head movements and more defining characteristics for each fighter, UFC 2009 has some real potential to be the most complete fighting game out there. Career Mode could use a major retooling, with the prospect of The Ultimate Fighter reality show integration being the most promising addition to future installments.

The online play is where this game has its legs and it's pretty much what you'd expect. The net code is solid and you have the usual quick match, create game, ranked and unranked options. The cumbersome menu interface extends into the online experience unfortunately, so we're left with no lobby support. It's very much a "love'em & leave'em" style of player matchmaking. Fans of ranked multiplayer should be warned that rage quitting is alive and well. A update to resolve this issue is supposed to be in the works but until that happens, be prepared to have some wins snatched away from you by unsporting players how can't bear the thought of a tarnished fight record.

My critiques may be fast and furious against UFC 2009 Undisputed but the fact remains that it is an amazing convincing portrayal of MMA and it packs in an overwhelming amount of depth and replayability for the $60-$70 asking price. The combat system, while not perfect, is a wonder of painstaking authenticity and it truly is an onion that will unravel layer after layer with each hour you put into learning it. For most fighting game fans, there isn't much more you could ask for. Newcomers will feel welcome too, with the adjustable difficulty levels, expansive practice modes and tutorials and the Classic Fights to keep them busy. The career mode is a bust but nearly everything else about UFC 2009 Undisputed shimmers with love and respect for the sport of mixed martial arts.