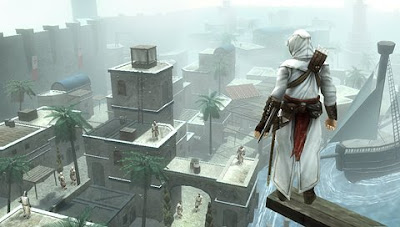 Today Ubisoft shared some more details on their upcoming Assassin's Creed: Bloodlines game for the PSP. Bloodlines continues Altair's story from Assassin's Creed in his quest to hunt down the Templars in Cyprus. Ubisoft has shared a new trailer for the game as well as a Q&A with Producer Frederic Lefrançois.

Here's the Q&A and game trailer.

Who is in charge of the development?
The game is developed by the Griptonite Studio under the supervision of Ubisoft Montreal’s Assassin’s Creed Core Team.

What is the storyline of the game? Can you give us a quick synopsis?
Assassin’s Creed PSP picks up right where Assassin’s Creed ended. After the death of Robert De Sable by Altair’s blade, the Templars, led by Armand Bouchart, fled the Holy Land to settle on the island of Cyprus. Following their tracks, Altair has the firm intention to put an end to their quest for power. Altair will help the local resistance fight the Templar’s’ occupation and get rid of the Templar commanders.

How did Altair evolve as a character from the first Assassin’s Creed to the PSP game?
With most of his preconceptions shattered and cast among the blood of slain Templars, Altair enters the events of “Assassin’s Creed: Bloodlines” with an open mind. No longer bound by Al Mualim’s leadership, he forges his own path and destiny. He has become more curious, more inquisitive and far less trusting.

What main gameplay feature can we expect in “Assassin’s Creed: Bloodlines”? Will the player get to investigate before every assassination mission?
You can expect to enjoy the core gameplay of the original Assassin’s Creed including the signature free-running and the intuitive combat system. Before killing his targets, Altair will get to complete a variety of missions, not always investigations. There are 8 new mission types and we wanted each mission to feel as fresh and exciting as the final Assassination moment.

How is the open-world and free running that are key elements of the Assassins Creed brand presented in the PSP game?
As it was the case in Assassin’s Creed, Altair will get to explore various large cities. This time around Altair will discover the cities of Limasol and Kyrenia in Cyprus, a beautiful and historically very interesting island in the Mediterranean Sea.
Once again, you can expect Altair to master his environment while performing all of his signature moves. In fact, Altair will free-run, sprint, fly between beams and climb everywhere to take advantage of its surroundings. This is a huge benchmark technology wise as this kind of freedom of movement has never been seen before on the PSP.