Ghostbusters The Video Game: I Ain't Afraid of No Demo 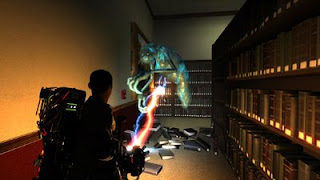 I fired up my Xbox 360 over the weekend to don my grey jumpsuit, Ecto-Goggles and Proton Pack for some spooky Ghostbusters: The Video Game demo action. The game, which released last month, was developed by Terminal Reality for the PC, PS3, and Xbox 360, while Red Fly Studio developed the PS2, PSP and Wii versions, and Zen Studios developed the Nintendo DS version. All these versions will be published by Atari in North America.