Game Set in Canada Being Made in… Canada! 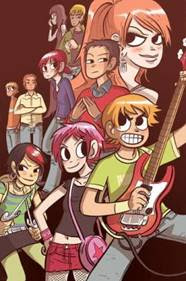 I really wanted to throw in the name Scott Pilgrim into the title of this article but then it occurred to me that maybe not everyone has heard of this quirky comic series. Now before you roll your eyes at me, non-believers, let me tell you that there are only 5 comic books in the series that you have to read/collect, it’s set in Toronto, and it’s full of video game references, and it’s being turned into a movie starring Michael Cera and directed by Edgar Wright. Now, go read the series! I’ll wait until after the jump…

For those that were too lazy to find and read the books, I’ll give you a quick recap: the story centres around 24 year old slacker, Scott Pilgrim who falls in love with the mysterious Ramona Flowers but must defeat her 7 evil exes in order to date her. If that doesn’t sound like a video game plot than I don't know what does.

The Québécois developer is known for such series as Assassins Creed, Prince of Persia (from Sands of Time onwards) and most of the Tom Clancy games but let me ask you this -- are any of these games set in our glorious country? Thought not. But that is soon to change.

Details regarding the game are still sparse, with no mention of genre, platform or whether there’ll be a Guitar Hero like mini-game where you actually play songs as Scott's band Sex Bob-omb and, oops, sorry. I got a little carried away there.

The creator of the books, Bryan Lee O’Malley, has stated on his blog that, “(The game is) going to be very cool and I'll be very involved.” As an ardent devotee of the series, this comes as very good news to me and other fans because the transition from movie to video game traditionally not always been smooth.

Further information should crop up in the coming months with the movie set to be released along with the game sometime in 2010. We will have all your Pilgrim updates here at NextGen Player.
Announcement New Game