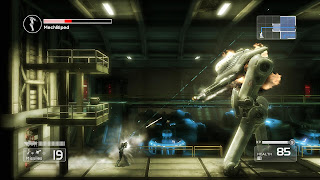 Shadow Complex is a rare game that offers exceptional value for the money, with weapons and challenging levels that will make you want to play though more than once. The worker bees at Chair and Epic have created a stellar experience for Xbox Live Arcade, and not even a laughably bad story can keep Shadow Complex from being one of the best games of 2009 thus far.

Shadow Complex had a lot of people watching it closely prior to the August 19th release. We saw Cliff Bleszinski play it at E3, and no secret was made of the game having a larger than usual budget compared to the average Arcade title. The investment looks to have paid off though, as the end result kept me hooked for a solid 6 hours of exploration and punching people in the face.

As alluded to in the opening paragraph, Shadow Complex's weak point is the story, or lack thereof. From the generic characters right though to the entirely predictable ending, it does little to keep you interested in the world it takes place in. Thankfully, that world just happens to contain things like jet-packs, grappling hooks and a gun that shoots foam. This is the real strength of the game. It strips away all of the elements we've become accustomed to putting up with like falling damage and limited ammunition. Instead, you can jump around and explore without fear, or spray enemies with your rifle without having to constantly collect ammo. You might wonder if this leads to the game being too easy, but rest assured this is not the case. I got my ass handed to me more than a few times during my playthrough on the normal difficultly; the speed at which enemies can lower your health might catch a few gamers off guard at first.

The game takes classic side-scrolling gameplay and adds a twist. You'll be able to shoot into the backgrounds of environments, and enemies will approach you from this angle as well. Learning how to target what is in your direct vision as well as your periphery will be an important skill to master through the game. Along the way, you'll encounter new weapons to utilize, as well as grenades and rockets. Rather than simply hand you these tools and be done with it, Shadow Complex will offer you a very bare-bones amount of them, and encourage you to explore in the hopes of finding upgrades. This leads to a real sense of reward for crawling through every airduct, underwater passage or side-room you find. You never know when you might find a powerup that will increase your health or amount of grenades you can carry.

The weapons vary from a simple pistol to futuristic rifles, all of which sound powerful in their own way. This brings me to another point I want to mention, that being how good the sound effects are in the game. Not everyone is going to care that there is a sound to signify that you've cleared a room full of enemies, but I'm willing to wager the first time you hear the noise that accompanies breaking the sound barrier while running, you'll have a smile on your face. The music flares at key moments, and I can live with the voice acting.

Combine this with frequent updates that let you know how close you're getting to certain achievements, or your own progress versus your friends and you're going to want to spend some time exploring everything Shadow Complex has to offer. At 1200 MS points, the game is more than worth the money, and offers an enjoyable experience from start to chaotic finish.