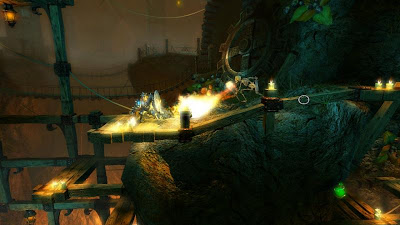 So here I am, sharing with you my review of Trine for the PC. This marks a special occasion of sorts because being strictly a console gamer, I've never really muddled with gaming on the PC. However, with Trine I decided to make an exception. Having read previews and seen screenshots of the game, there was a lot that intrigued me about it...and the fact that I'm a sucker for a good platformer. Thus, when the good folks at South Peak Games (North American publisher for Trine) provided me with a download code for the PC version through Steam, I couldn't resist.

Trine is your familiar fantasy game where the story revolves around a kingdom under the control of an evil sorcerer. In order to save the kingdom, an ancient artifact known as the Trine must be obtained in order to release the evil sorcerer’s control. At your disposal is a thief (Zoya), a knight (Pontius) and a wizard (Amadeus). These are the main characters of the game and are available to utilize throughout. Each character can obtain special skills (up to a total of 3) by defeating enemies and amassing experience points. This in turn allows you to level up your skills. There are also a number of treasure chests hidden in every level that contains various items which become very useful perks for each of the characters.

As a platformer, Trine introduces interesting elements of gameplay. Every level in the game requires the abilities of all three characters to advance through them and results in an experience that is varied and balanced. Each character possesses unique attributes and skills that help you progress through each of the levels by overcoming a variety of obstacles and enemies. For example, Zoya can launch a rope with a hook to pull herself up elevated platforms or swing from them. Pontius' strength is his weapons and attacks that are quite efficient in disposing of enemies. Amadeus the wizard can use magic to elevate or move objects as well as create planks and cubes that become vital when trying move to areas of difficult reach.

The visuals in Trine are vibrant. The entire game is rich in colour with a vast amount of palettes used. The game’s environments resemble works of art with detailed landscapes and backgrounds. Creative production in this game is surely top notch. The game’s graphics are equally impressive. The team at Frozenbyte has done a wonderful job by integrating the right mix and elements of 3D graphics into a side scrolling game. Sound production is also on par with the visuals. All of the voice acting is executed convincingly and in a manner you’d expect from a good fantasy game. A solid musical score adds the right finishing touches to the audio. The controls are what you’d expect from a typical PC game. You use the ‘w, a, s, d’ keys on the keyboard to move and the mouse to aim and attack as well as switch weapons by using the scrolling wheel. As mentioned before, I’m not an avid PC gamer and having to use a keyboard to control the character’s movement wasn’t the best experience for me. As an added touch, an available co-op mode let’s you play with two other players to each take control of the game’s three characters in a collaborative effort. This adds an additional layer of variety in that there is the opportunity to simultaneously combine the unique skills of each character for a greater advantage against enemies and to overcome obstacles.

Among all that is good with Trine, there are a few items that really had me scratching my head. For one, the game’s overall difficulty is practically nonexistent. There are 15 levels in the game and I found myself easily progressing through the majority of them. In fact, it wasn’t until the final level that I actually felt I was presented with any kind of challenge. Another disappoint for me was the absence of boss battles. I think I played through about 4 levels before I realized this and it was such a letdown. For me, having a platformer without any boss battles feels lacking in substance to a certain degree.

Trine is for the most part, a fine example of what a good platformer should be. Strong gameplay and great level design coupled with great visuals and audio. On the flipside, it does not provide enough of a challenge to keep one completely interested and can be played from beginning to end in a handful of hours...which is a good thing I suppose. For a game that costs $29.99 through Steam, I expected a bit more.

Cons:
- Game is way too easy
- NO BOSS BATTLES...what gives?