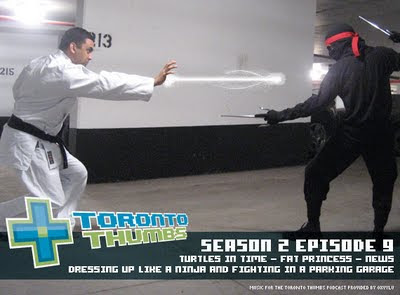 I decided to do a little experiment tonight so I hope this works out. Earlier today I visited the Toronto Thumbs website and listened to the latest Toronto Thumbs Podcast -- Season 2, Episode 9.

The teaser image for the podcast episode shows Toronto Thumbs team members Shaun Hatton and Jorge Figueiredo dressed as ninjas and engaging in some mortal combat in a parking garage. I'm not sure what dark magic they're dabbling in, but it looks like they've learned how to channel their inner ninpo into deadly fireball attacks. All of this makes me glad I'm on their good side.

The podcast was at times humourous, entertaining, enlightening, and downright goofy. I definitely recommend all of our readers to take a listen.

So, about the experiment. I asked Shaun Hatton to whip up a quick post to introduce himself to the NextGen Player community and to provide a good segue to the podcast. The thing is, I told him that I wasn't going to read the introduction until after the post goes live on the site. I have no idea what he wrote, but I'll post my reactions in a few minutes after I give this whole post a read.

Why do I have a gut feeling that silliness is about to ensue? Hmm...

I write this with no knowledge of what Paul Hunter plans to write as an introduction for me. What I do know, however, is that he probably lied about something. The very fact that he asked me to write a little something with a link to Episode 9 of the Toronto Thumbs Podcast makes me suspect he has some clandestine plan to do something very evil. Know that I am not going to try to stop him.

I met Paul Hunter at a truck stop in the Niagara region along the QEW in the fall of 1994. The restaurant had three arcade machines: Galaga, Spy Hunter, and Street Fighter II. These games were all in the wrong cabinets, but that doesn’t matter. What mattered is that a young Mr. Hunter, then only about 16 years old, had held the high scores on all three of these machines. In fact, the moment I met him he was just about to beat one of his old high scores in Galaga.

“You’re pretty good!” I remarked. He didn’t reply with words. Instead, he held up his right hand – his firing hand – and lifted his index finger as if to say, “hold on.”

His hand must have been in the air for two seconds, but his movements were so deliberate that it seemed like an eternity. He placed his hand back on the button to fire off one shot. Then his ship exploded. Hit by enemy fire. I thought he’d be mad at me for breaking his concentration, but he was not.

“I come here every day,” he said. “Every day I play this game, and every day I beat my high score by a hundred points.”

I asked him why he didn’t just beat his high score by as much as he could, and he remarked that it would ruin the pattern on the high scores screen. Sure enough, when the screen came up, it looked brilliant. The initials “SEX” filled the left side of the screen. His points were on the right. I had never seen that word so many times on the same screen before.

We talked for a short time about videogames. I was only in there to use the bathroom and had to get back to the car soon. But I did catch his name: Paul Hunter. Most of the talk centred on which system was better: Super Nintendo or Sega Genesis. We couldn’t come to an agreeable conclusion, but he did ask me, “If you love Super Nintendo so much, why don’t you marry it?”

And that’s oddly enough how he re-introduced himself to me last year, upon finding out that I wrote for Toronto Thumbs. It was the subject of his first-ever email to me. Weeks later, we went out for Mexican food to talk about videogames and about the possibility of his site and my site forming together “like Voltron” to do some galaxy-wide damage. This is when I caught that glint in his eye for the second time: that same, evil look. The neon green Mohawk was gone, but there was no mistaking the look of mischief. He was either going to murder me to wear my skin or he wanted to kiss. The fact that I’m still alive should indicate how that went down.

Anyhow, he probably didn’t want me telling you all that. But if he doesn’t publish this on his site, I’m going to publish it on mine. Speaking of, Episode 9 of the Toronto Thumbs Podcast went up this weekend, so you should check it out if you want to hear some videogame talk peppered with a good amount of goofiness. Paul thinks you’ll like it.
Har Har Har Podcast