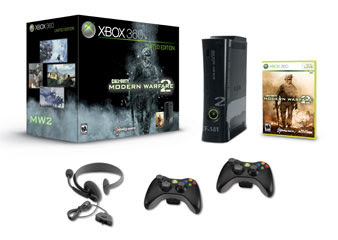 You didn't have any doubts, did you? The Xbox 360 limited edition Modern Warfare 2 console will be invading Canada on November 10. The consoles will have an estimated retail price of $429.99 Canadian.

Not only will you get the hotly anticipated follow-up to 2007's Call of Duty 4: Modern Warfare, you'll also get a 250GB Hard Drive, two Xbox 360 Wireless Controllers, as well as an Xbox 360 Headset. Oh and a "high-speed, low-drag, battle-ready design". That's hyperbole for the console looks kick-ass.

The limited edition console will available for pre-order by the end of this week.
FPS Xbox 360