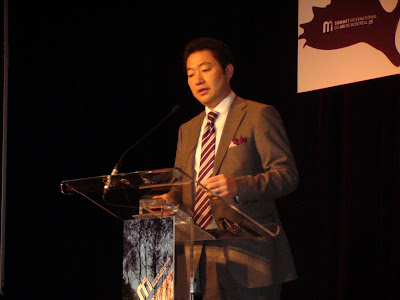 MIGS 2009 had a very special keynote speaker this year in Yoichi Wada, CEO of Square Enix. Wadasan officially opened the conference as the first speaker and provided a thoughtful commentary on game creation.

He covered very interesting points on how factors such as IP, globalization, form and community are not only important, but necessary in creating and developing video games that will provide engaging, relevant and memorable gaming experiences. 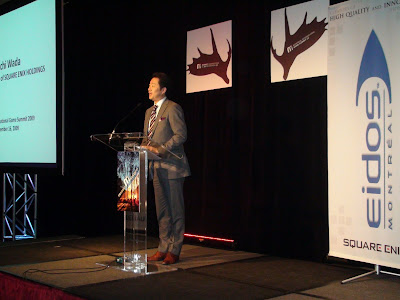 From an IP perspective he emphasised that:
- it is a source of value for products derived from all creative industries
- it is highly important for gaming companies to take the time to develop their own IPs through first party in-house development
- too much use of IP can be negative if substance within a franchise cannot be maintained
- the key to continuing a gaming franchise is to be able to develop a good and engaging story for each iteration

Regarding Globalization:
- creating a game that would appeal to a global audience is not possible
- games have to be targeted to people's lifestyles and tastes
- for Square Enix, this means having a global presence and network of studios that can allow them to initiate and push innovations in their games by understanding people on a global level

On the topic of Form:
- there is a state of "Cambrian Explosion" of game forms
- there are numerous types of distribution and reach that games have
- this is a good situation for the industry as a whole
- however too much variety, distribution and reach could cause confusion amongst gamers and thus become detrimental to the market

And the final point about Community:
- technology has shifted the core value of games
- there is a hierarchy that begins with hardware at the base, which drives development of code, which results in games that users interact with and ultimately drives an exchange of data with the user, which then drives the development of community
- there is a barrier in knowing who is exchanging data and so there needs to be greater focus in being able to understand data 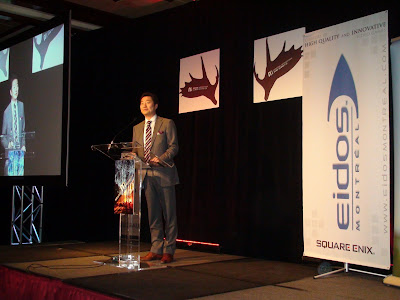 Yoichi Wada then continued to explain how his vision and that of Square Enix is to produce games that best utilize a combination of all these elements. He is fully committed to his company's mission statement that states...

"To spread happiness across the globe by providing unforgettable experiences."

Wadasan's lecture was highly entertaining and for me personally, it was an unforgettable experience to hear directly from one of the pioneers in the gaming industry.

It will be interesting to see how MIGS will top this for next year.