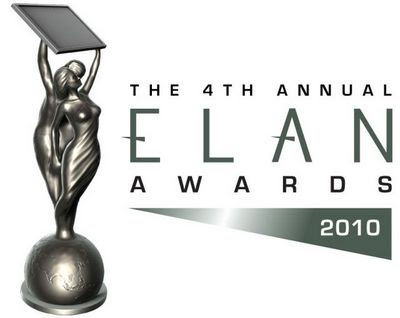 The announcements have come in hot and heavy this week for the 2010 ELAN Awards. We last reported on the Canadian-produced video games, animation and visual effects award show during the summer when rumours surfaced that the event founders were contemplating moving the show south across the border.

That rumour has since been confirmed and the ELAN Award organizers issued press releases earlier this week detailing the new host city and the award categories...

The first three ELAN Award ceremonies were held in Vancouver, BC. No more. The 4th annual ELAN Awards will be held next summer in sunny San Diego. With the show`s move to the US, the ELAN founder & producer, Holly Carinci has also adopted a bigger, bolder approach to her event. Instead of being held in a single night, the awards next year will run from July 17th - 19th and will encompass a VIP-only pool party, a raucous street celebration and finally, the award show gala reception.

The award categories for the revamped show have also been revealed to the games press. Compiled with the help of industry feedback, it`s a comprehensive list of awards to say the least, and shows an astute awareness of the trends relevant to gaming today as well as paying tribute to the various specialties associated with putting out a quality video game. The categories are:

1. BEST GAME OF THE YEAR

2. BEST E-RATED GAME OF THE YEAR

3. BEST TEEN-RATED GAME OF THE YEAR

4. BEST MATURE-RATED GAME OF THE YEAR

19. BEST VOICE OVER in an VIDEO GAME PRODUCTION

Nomination submissions official open on January 4th, 2010. More details regarding the submission and judicial process are expected to arrive next week just prior to the holidays.

I know a few of us here at NextGen Player have expressed concern about the ELAN Awards moving into the US market, a place already awash in award shows and industry events such as E3, PAX, GDC and the recently held Spike VGAs. Following these recent announcement, however, I`m inclined to think the ELAN organizers are on the right track. With a run of three days, they are sparing no expense to make a big splash and the comprehensive, thoughtful award categories give it an air of legitimacy even established shows like the VGAs seem to lack.

My only reservation right now is the timing of the event. Award shows that honour the best of the preceding year typically hold their celebrations early in the new year. Getting people to care about the best of 2009 during the sweltering summer of 2010 may be a stretch for some. This is usually a time of looking forward, in the wake of big conferences like GDC and E3 where publishers are showcasing their latest offerings for the remainder of 2010 and beyond.

How the ELAN Awards will fare in this climate is anyone`s guess. It will certainly be an interesting experiment and provide a welcome bit of competition for the established players down south.