Nintendo of Canada Wishes You and Your Pets a Happy Holiday 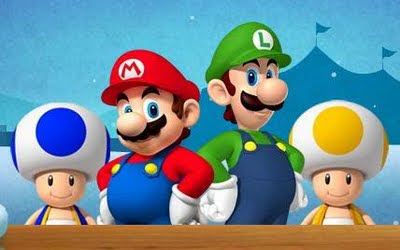 With the holidays fast approaching I received a nice eCard in my mail today from Matt Ryan, PR Manager for Nintendo of Canada. The card, or rather flash game, is a fun snowball flinging romp featuring the cast of New Super Mario Bros. Wii: Mario, Luigi, Blue Toad and Yellow Toad.

In Holiday Snowball Toss, the object of the game is to throw snowballs at various inhabitants of the Mario universe that pop out of seven pipes or dangle from the ceiling. The characters include: Bowser, Stars, Boos, Bomb-ombs, Spinies and four Koopalings -- Larry, Iggy, Roy, and Ludwig Von Koopa.

It's a fun little time-waster if only to put your face on Waluigi and see yourself decked in his lanky, purple overalls.

My highest score is 550 and that's for one of two reasons: 1) I'm playing on a laptop without a mouse and have limited accuracy; or 2) I'm so used to being the victim of a snowball that I have no tossing skill of my own to speak of. I'll let you decide which one of the two is reality.

And while you're playing, know that Nintendo of Canada wishes you, your family, and pets a happy holiday season.
Flash Wii