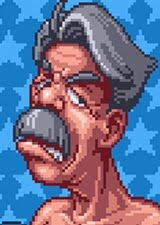 DEAR GABBY: I'm a young, 20-something hardcore gamer girl with a hardcore dilemma. Recently I made a decision to exit a four-year relationship with a guy I once considered to be my co-operative multiplayer partner for life. He was everything I ever wanted in a gamer husband; he knew where to find all the sex minigames in God of War, he knew all the right moves to set-up a Tetris, and goddamn he could play a mean Ocarina.

The thing is though, whenever we played Singstar it was a total embarrassment. Not only did he constantly rank as Tone Deaf, but he insisted on increasing his mic sensitivity until the gauge was completely full. As a result, his hoarse manly voice was so much louder than mine, and I constantly lost points because I couldn't hear my own pitch. Call me picky, but I want a man with a soft, effeminate voice, like Raiden, who's willing to sing a duet of Love Shack and achieve at least Wannabe rank. So, I backed-up my PS3 save files and left him.

I wanted to believe so bad that the grass was greener on the other side, but my new guy is much worse. He claims that Rock Band is "superior" and "more dope" than Singstar because up to four players can play simultaneously. Doesn't he realize that a couple means two!? I kind of wish I had my old man back, despite his flaws. Do you think I should give up my dreams of ever finding an effeminate cyborg ninja? -- SINGSTAR DIVA IN DISTRESS

DEAR SINGSTAR DIVA IN DISTRESS: I'm 56-years old and have never been in a relationship so I cannot empathize or relate to your situation. The closest I've ever been to being on a "date" is when a nurse treated my concussion in a private hospital room after Bald Bull won the Minor Circuit title and gave me a celebratory Bull Charge in the locker room. While I can't say if you'll ever meet your ninja, if you're ever interested in a pathetic French boxer named Glass Joe, I can make the introduction. What he lacks in defense he makes up with a heart of gold; and I hear if he makes you really mad one super punch and he's out like a light for the rest of the night. Yaaay!

If you have a question about love, life or video games for DEAR GABBY, write us at comments@nextgenplayer.com.
Dear Gabby