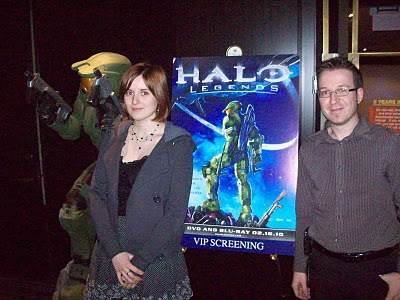 Halo Legends was released today on retail shelves nationwide, and to celebrate the occasion, Warner Home Video invited Paul and me to a VIP showing of the movie on Blu-ray. The screening was at the Hazelton Hotel, whose private theatre is legendary among attendees of the Toronto International Film Festival. Being possibly the only vegetarian gaming blogger ever, I passed up on the cute mini hamburgers in favour of the curiously addictive cheese cup-a-salads. After the screening, there was a raffle for a very cool-looking limited edition Halo print, and gift bags for everyone. Suffice it to say, the experience was awesome.

Having seen (and loved) The Animatrix, a similar Warner Bros. production, I came to the viewing expecting the same sort of presentation – and for the most part I wasn't disappointed. The animation styles were generally excellent and the soundtrack was spot-on. However, one thing that The Animatrix excelled in doing and that Halo Legends fails to embody is the way in which the seemingly random stories come together as a cohesive whole. A number of the stories feel very similar and uninspired; there are no surprises, no little miracles or mercies. The stories are not only predictable, but predictable in the exact same ways. Again and again, the hero sacrifices himself to save his company. Again and again, the faceless, silent, and super-powerful stranger ends up being a woman.
The effect is like watching seven movies at random and finding strong connections between them that shouldn't exist. These similarities are unsettling and they detract from what could have been a brilliant collection.

Having said that, Halo Legends is definitely worth watching – really, a must-see for any Halo fan. The highlight of this collection is probably the aptly-named Odd One Out, a humourous Dragon Ball-esque parody revolving around the inept Spartan 1337 and his adventures fighting a Covenant-made monkey monster. While this short is pure comic relief, I do wish some of the other shorts would take a similarly lighthearted air – a good story doesn't always have to be serious. Following that, my favourite was The Babysitter, a short about the rivalry between ODSTs and Spartans. The story was realistic, with the type of sweet and bitter humour that is so intrinsic to real life but is rarely shown in drama. Homecoming was another solid piece, shedding light on the tragedy that is fundamental to the creation of Spartan soldiers; very dark but also touching. The Origins stories are essential to the collection, and narrated in a way that is engaging even for those who already know the history.

As for the less-than-stellar pieces: Prototype had some potential, but ends up being very generic anime stock, especially compared to similar and more engaging pieces, particularly Homecoming and The Babysitter. The Package looks great, but feels more like a playable in-game cutscene than a short film – and while the battle scenes are breathtaking, they're not enough to support the flat story. It's the sort of movie you want to be playing rather than watching. The least interesting short of the collection is probably The Duel, a samurai fight-for-honour piece with a flat storyline matched with an eye-burning choice of animation style. The studio tried to give the piece a “moving painting” look – a nifty idea, for sure – but they ended up using a watercolour filter that looks more like a high school media studies project than professional animation. Interesting attempt at innovation, but ultimately unsuccessful.

All in all, I recommend Halo Legends to any fan of either Halo or anime, but with the suggestion that you watch each short separately . When condensed in one sitting, the stories blur together – so take each one on its own and enjoy it for being an entertaining audiovisual Halo experience.
Anime FPS Movie NextGen Player Impressions Xbox 360