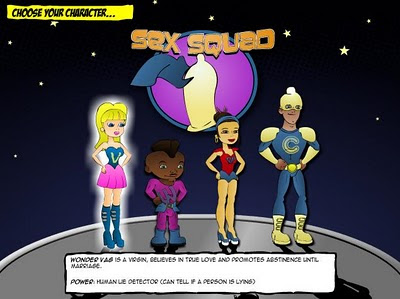 One of the more interesting pieces of news I read last week came from the Montreal Gazette which published an article about a new sexual health video game from the Middlesex London Health Unit.

This made-in-Canada Flash game called "Adventures in Sex City" stars a group of superheroes known as the Sex Squad and consists of four members: Wonder Vag, a virgin who believes in true love and promotes abstinence until marriage; Willy the Kid, who's out to prove that size doesn't matter; Power Pap, a sexually active woman who, after a close encounter with an STI, now dedicates her life to regular testing and pap tests; and finally Captain Condom, a scientist that had a freak accident in the lab and is now half man, half condom.

In the game you face off against a super villain name the Sperminator, a jacked wrestler wearing a lucha libre mask and has penises for arms. Each round you're asked a sexual health question, after which the Sperminator will shoot his wad at you. By correctly answering the question, your superhero will erect a shield and deflect that nasty sperm back on his face. Answer a question wrong and you'll get spooged real quick.

While I can't see myself playing this game long-sperm, err term, it was a fun little romp to pass some time this evening.