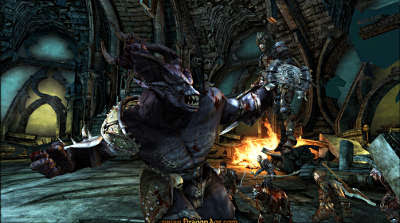 There are a few reasons why you're only just seeing a review for EA/BioWare's Dragon Age: Origins in February of 2010, over two months after its release. For one, I am a notorious snail gamer. I'll admit that the idea of doing a speed run never appealed to me. I'll sniff out almost every corner, open every chest and drive you mad if you try to watch me play a single-player game.

Then you have to consider the size of Dragon Age itself. The game is massive. It is the very anti-thesis to a speed run. Played briskly, the campaign has been projected to take 50 hours, perhaps 40 if you are good. Fifty hours! Who plays a single game for that long nowadays? The better question might be: is the game even worth 2 hours of your precious time? Read on to our review for an answer to this and so much more...

Dragon Age: Origins (DA:O) basically takes everything you know about fantasy RPGs and everything you know about Lord of the Rings and repackages it for you in an updated, refreshingly un-ironic sort of way. Bad? Not exactly. There are the elves, dwarves, dragons and mages we all know and love. Zombie-like creatures known as Darkspawn stand in for the role of orcs but they are essentially orcs for all intents and purposes. And there's nothing new to see in the various castles, towns, forests or dank, dingy dungeons. And while the story driving our adventures is textbook Tolkien boilerplate, the writers behind DA:O twist around some of our most cherished fantasy tropes just enough to add that unique wrinkle or spark to ignite your imagination.

In the land of Ferelden, city-born elves are kept as borderline slaves and are segregated from humans into ghettos known as the Alienage. In this brave new fantasy world, mages are not wizened, beard-brushing eccentrics but rather feared outcasts who are either locked up as life-long academics in their magi tower, or hunted down as dangerous heretics by holy knights known as templars. And the dwarves... they're not just the stereotypically jovial, beer swilling lugs. Dwarven society is caste driven, deeply traditional and they play a lot more politics than you'd ever expect from guys who look and sound like Gimli from the LoTR movies. 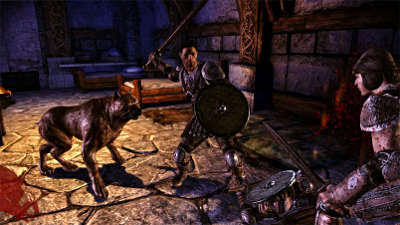 Dragon Age: Origins is very much an update on the classic, old-school style of RPG dating back to the AD&D Gold Box series and and it's a formula that's been perfected by BioWare over the last decade. And when I'm talking about old-school game play, I'm referring to things like tactical combat, 4-man parties, invisible dice rolls and deeper conversational choices. In DA:O you bring up a custom character selected from a choice of 3 races (human, elf or dwarf) and 3 classes (warrior, rogue or mage).

Unlike any current RPG of its ilk, your character choices at the outset may vary to the tune of 6 completely different origin stories, ranging from the human noble origin to the dwarven commoner. Each of these introductions takes two to three hours to complete and they are so distinct as to be well worth the time to play through them all. Key characters in some origin stories will make reappearances later in the core plot and many other fascinating relationships are given additional subtext through one's playing of multiple origins.

While a choice of only 3 classes may seem a bit restrictive to players brought up on the overwhelming class selection of Dungeons & Dragons, BioWare has crafted a deceptively simple character development system. They've stripped the sometimes arcane AD&D-style rules to its barest essentials. Skills are neatly organized into groups and laid out in a linear grid, showing progression from basic to advanced levels of any one skill. It's less of a skill tree than it is a mix n' match restaurant menu. It works wonderfully for the purposes of the game while still providing the depth for player who really pay attention to how they build their characters.

All the better to effectively manage your party of adventurers. Yes, a party. Along the way you can recruit over a half dozen additional companions to your cause. You may take only three with you on field missions but allies can be swapped in and out whenever you are back at camp. The array of tactical choices and customizations increases that much more as you equip and tailor your party members to create a balanced team of elite darkspawn slayers. Thankfully, casuals who are merely interested in moving the story along can gloss over the fiddly details and auto-level all of their characters.

Very early into the game, you are recruited into the ranks of the Grey Wardens (read: Jedi Knights), a sacred order of warriors sworn to defend the land from the Darkspawn hordes. The start of a Blight -- a resurgence of the darkspawn that occurs every few centuries -- is at hand, and it's up to you and a handful of surviving Wardens to unite the various factions of Ferelden and create an army to defeat the Blight.

BioWare makes few concessions with their epic RPG. Aside from the dozens of main and side quests, the countless battle encounters and the somewhat cut n' pasted dungeon crawls, there are hours of conversation to be had starring a gigantic cast of NPCs, all fully-voiced by actors ranging from competent-to-excellent. The scripting is up to BioWare's usual high standard. Beyond the cutscenes involved with the main plot, there are a dizzying number of optional conversations to be had with party members back at camp, the romances and even the impromptu interactions between party mates while in the middle of a quest. The sheer amount of story-related elements in Dragon Age is perhaps rivaled only by its consistent quality. BioWare's world-building skills are astounding.

I'll admit that I sometimes wished the story would pick up the pace a little. Side quests are relatively quick affairs and there's very little open-world exploration to lead you astray from the mission critical path. Yet the game drags considerably in a number of spots. The main quests are usually nothing more than a succession of increasingly ponderous dungeon crawls. You really have to be into your epic fantasy minutia to stick with it for the long run. Upon experiencing the game's thrilling climax, you're just as likely to cheer as you are to breathe a sigh of relief: "It's finally over!".

Surprisingly, despite its epic length, DA:O almost demands a second or third playthrough. Disregarding the origin stories, there are a number of Xbox Achievements tied to your moral approach to the game's key conflicts. Your choices in-game will also affect which party companions are added to your team and unlockable class specializations. The finale itself is a culmination of the vast array of choices you've made through out your adventures. The number of possible outcomes is very impressive and you should hang on to multiple saves in case you want to backtrack and try something different. The morality system itself is pretty subdued and is based largely on pragmatic cause-and-effect relationships as opposed to casting down a binary ray of judgement over your actions.

Were it only as polished as it should have been, Dragon Age would walk away with a perfect score. That's a pity, because the game is a hodge-podge of technical gaffs. Bizarre cutscene behaviors can result in odd poses and awkward blocking angles. The audio likes to cut out during a dramatic speech, a problem not easily remedied by the subtitles, which are inexplicably placed at the top of the screen. The game hard locks on a few occasions and is not inclined to autosave quite as often as it should. The overall unpolished feel to the game is topped off by some glitchy AI behaviour which sees melee fighters constantly forgetting who they're targeting, not pulling aggro or just pathfinding the longest possible route to their destination.

I may have my quibbles but the fact remains: a game like this doesn't come around very often. The amount of craft put into Dragon Age: Origins is simply astounding. Even with its many flaws and BioWare's sexier sci-fi epic competing for your attention, Dragon Age is a masterpiece in fantasy gaming and a must-play for any hardcore RPG fan.